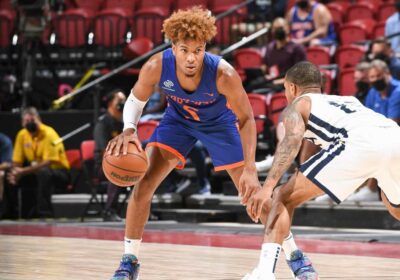 Draft pick that got away shows why Knicks coveted him

Knick add yet another shooting guard

LAS VEGAS — The Knicks’ signing of second-round pick Miles McBride didn’t take up cap space and will put the club in control of the West Virginia point guard for three seasons, The Post has learned.

Because McBride fell out of the first round (36th overall), he’s not eligible for the four-year rookie scale contract. McBride has inked a two-year, $2 million package at the NBA minimum for first-year players with a team option for the third year. McBride will make $925,000 in his rookie season.

The 6-foot-3 point guard has played in two summer-league games, excelling most in Monday’s win over the Pacers.

Playing his trademark tough defense, which had head coach Tom Thibodeau lobbying for the Knicks to draft him, McBride scored 14 points and went 5-for-7 from the field, including 2-for-3 from 3-point range. Scouts like McBride’s ability to stay attached to his man after absorbing contact on picks.

“I like his tenacity, his defensive intensity, he can play on the ball or off the ball,’’ Knicks summer-league coach Dice Yoshimoto said. “I like what we saw. He’s very versatile. He can guard the 1 or 2.’’

McBride, 20, can become an unrestricted free agent in 2024. He averaged 15.9 points and 4.8 assists as a West Virginia sophomore. The Knicks believe he can play both point guard and shooting guard.

McBride shot 41.4 percent from 3-point range in college, but in the summer-league opener Sunday, he went 0-for-4 from beyond the NBA 3-point line — with a few of his shots falling short.

McBride was unhappy to fall into the second round, saying afterward he would make teams “pay’’ for it. The Knicks announced McBride’s signing before summer league, but didn’t release terms.

Knicks center Mitchell Robinson, like McBride, was selected 36th in the 2018 draft. Robinson made more in his first season ($1.5 million) than McBride will, but he is locked in for four seasons. The Knicks just exercised the option on Robinson’s contract, and he’ll make just $1.8 million this season.