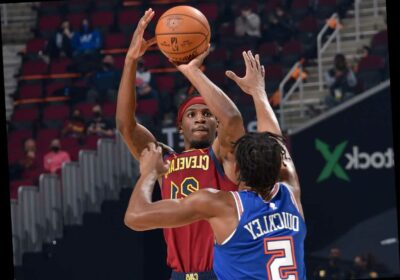 Knicks rookie’s next appearance should be longer than 57 seconds

Andre Drummond, a Westchester County native who will be a free agent this summer, pounded the Knicks for 33 points and 23 rebounds Friday night, but it was former Knick Damyean Dotson who delivered the knockout blows for the Cavaliers.

Dotson’s seven points in the final 2:40 sent the Knicks to their fifth straight loss in a 106-103 thriller at Rocket Mortgage Arena in Cleveland.

Barrett hit a desperation 20-footer before the shot clock buzzed to bring the Knicks within 98-97 with 1:33 left. But then Barrett tried dribbling between his legs and bounced the ball off the back of his foot, turning it over at the worst time, with 1:19 left.

That prompted a clear-path foul on Dotson, who sank two free throws. The Cavaliers kept possession and Dotson drove for a layup. With 2:40 left, Dotson hit a big 3-pointer over Quickley to give the Cavs a five-point lead.

Down four, Barrett turned the ball over again with 20 seconds left to ice it for Cleveland.

Drummond scored 20 points and hauled in 14 rebounds in the first half. Seven of his rebounds were on the offensive glass. No Cavalier in the last 20 years had posted a 20 and 14 half.

The Mount Vernon native may be on the move following this season. The Cavaliers may be willing to let the former Connecticut star go now that they have snared ex-Nets center Jarrett Allen in the four-team James Harden trade.

Cleveland built a 12-point lead in a wild third quarter, but Quickley helped lead another charge. He hit a 3-pointer, then a floater. Julius Randle (28 points, six assists) keyed the comeback that knotted the score at 80 after three.

Quickley, who was selected with the 25th pick of the first round in November, found creases in the Cavaliers defense and got the Knicks into a five-point lead playing mostly with the “Quickley Quintet’’ that killed the Cavaliers in preseason. The only difference in the young five-man band was Reggie Bullock in Barrett’s place.

In one lovely moment, rookie Obi Toppin, in his second game back from a three-week absence due to a calf strain, stole a pass and fed Quickley for a 3-pointer.

On the next possession, Quickley weaved inside and lofted an alley-oop lob for a Mitchell Robinson stuff and a 43-39 lead.

Robinson couldn’t compete with Drummond’s muscle, then he got hurt. Robinson fell awkwardly after missing a putback dunk. Coach Tom Thibodeau let him hobble up and down the court for two possessions before yanking the young center, and he went to the locker room. Robinson had his ankle taped at halftime and came out for the third quarter, looking less than 100 percent.