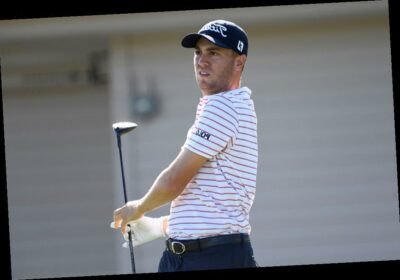 Masters champ arrested, accused of trying to run over his girlfriend

Take a shot on these players at Sony Open in Hawaii

Paige Spiranac fires back at body shamers: I’m ‘not a Build-A-Bear workshop’

Justin Thomas has lost a sponsorship with Ralph Lauren after getting caught using an anti-gay slur during the PGA Tour’s Tournament of Champions in Kapalua, Hawaii, last weekend.

Sports broadcasters caught the moment the 27-year-old said “f—-t” to himself after missing a putt in the third round during the tournament on Jan. 9.

Thomas apologized that same day, saying his foul language was “no excuse.”

Ralph Lauren on Friday said it was “disheartened” by Thomas’ language and was cutting ties with the PGA golfer.

“We are disheartened by Mr. Thomas’ recent language, which is entirely inconsistent with our values,” the fashion company said in a statement.

“As we make the decision, our hope is that Mr. Thomas does the hard and necessary work in order to partner with us again — truly examining this incident, learning, growing and ultimately using his platform to promote inclusion,” the company continued.

Thomas has been with Ralph Lauren since 2013, and was reportedly under contract until 2021, ESPN reported.