Home » Sport » Joy to the world: Olympic skateboarders cheer each other to the end

Joy to the world: Olympic skateboarders cheer each other to the end 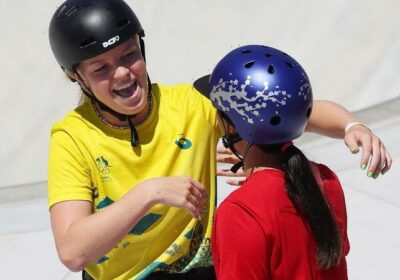 The Olympic Games can be a study in different ways of handling disappointment. You see all sorts.

Australia’s women’s hockey team collapsed to the ground in shock and tears after losing their quarter-final to India; many were too upset to speak, almost literally shattered. At the velodrome, unsuccessful cyclists trembled with anger, failing to convince with their “happy to be here” lines. 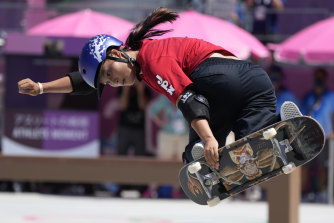 There were the painted-on smiles of sad gymnasts, and the blank-faced swimmers too knackered to breathe, let alone emote. And at the track, you could see Shelly-Ann Fraser-Pryce give her fellow Jamaican and sprint conqueror Elaine Thompson-Herah what you might call a hug while also social distancing.

Australia’s Poppy Starr Olsen, a veteran of 21, came an excellent fifth and participated in the signature moment of the final, helping to chair Japan’s devastated 15-year-old No.1, Misugu Okamoto, off the bowl after the favourite finished fourth. 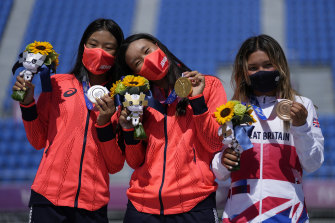 The action of the final can be told simply. Yosozumi posted a score of 60.09 with her first run. The only 60-plus score all day, it applied so much pressure to the more fancied contenders that none could quite cope. Hiraki and Brown produced clean but cautious runs that scored in the high 50s, but the orange-clad Okamoto, the most dynamic and bold skater, kept coming out with exhilarating, risk-filled attempts that loomed as sure winners until she kept falling at the end.

The action only told a small part of the story. Throughout the heats and the final, the competitors cheered each other with genuine gusto. They hugged before, after and even during their competition. There was non-stop encouragement and solidarity, as if they really, really wanted each other to do well. 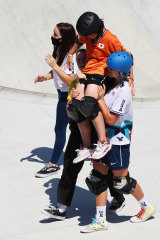 Olsen, from Bondi Beach, played a leading role in this. She and her friend Bryce Wettstein, from the USA, were hugging almost as much as skating. Wettstein produced a ukulele at the pre-final presentation. Whenever athletes fell while risking some new acrobatic trick, they came up smiling, as if it was easy come, easy go. It was so refreshingly joyous. But … could this be the Olympic Games?

Olsen explained later: “When I grew up skating, I was the only girl at the local skate park for three years, and I think it was the same for most of these girls. Then we met when we were skating in [competitions in] the US, and since then we’ve grown up skating together, we’ve become such good friends, it was such fun to be here at the Olympics – we finally did it.”

The culture of mutual support amid competition, she said, was particular to females who had come through a male-dominated sport. “It’s especially the girls. We’ve progressed together, everyone gets hyped up to learn tricks off their friends, and you grow off each other. The Olympics hasn’t seen too much stuff like that before. Everyone wants their friends to do well, and that’s why skateboarding is such a cool addition.”

But it is the Olympic Games, not the Olympic fun and games. When Okamoto, a moral beaten, fell on her last trick of a run when she would surely have won gold, she was crying even as she hit the floor.

Here, finally, was disappointment as we have come to understand it. Okamoto was inconsolable. In stepped Olsen and Wettstein, who put her on their shoulders and carried her off. She was still crying, but it was a memorable gesture.

“Misugu has put so much work in, and she’s won all the qualifiers,” Olsen said. “She puts a lot of pressure on herself to compete, and we wanted to let her know how much we love her. That’s what skateboarding is about, and it’s really cool to showcase that.”