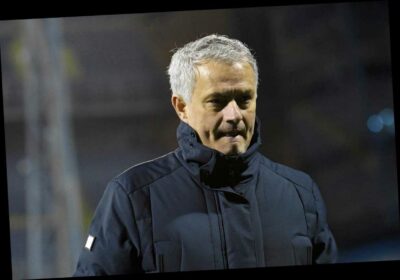 JOSE MOURINHO accused his Spurs flops of showing no respect for themselves as they crashed out of the Europa League.

Tottenham boss Mourinho said: “Football is not just about having players that think they have more quality than others. The basics of football goes beyond that. It’s attitude and they beat us on that.

“Before the game I told my players of a bad attitude and it happened.

“I believed the players only realised the game was in risk when they scored the second goal.

“I feel sorry for my team – I belong to that team – did not bring the basics of football but the basics of life, which is to respect our jobs and to give everything.”

"Mentally they got it wrong in the game. They did not expect Zagreb to take control, they did not make a response, they went downhill and they should have upped the gears.

"But there was not enough ability on the night to take responsibility, everyone was looking at each other.”

But Mourinho hit back, saying: “I don’t need Mr Hoddle’s words to feel hurt because I feel more than sad.

“I totally respect what somebody connected or not connected with the club says. I think we have to accept it.

“But I don’t need external critics because I feel deeply hurt with what happened with my team.”

Mourinho warned his stars the tie was not over despite their two-goal advantage – but they failed to heed his words.

He said: “If I forget the last 10 minutes of extra time when we did something to try to get a different result to go through, and the opening 90 minutes and the first half of extra time, there were one team who decided to leave everything on the pitch.

"They left everything there, they left sweat, they left energy, they left blood. At the end of the game they even left tears of happiness. They were very humble, very committed, and I have to praise them.

What I feel goes much further than sadness. The players only realised the risk when they scored the second goal and we went to extra time.

“On the other side my team – I repeat my team – that didn’t look like they were playing an important match.

“I also believe for every Tottenham fan at home every match matters and another attitude is needed.

“To say i feel sad is not enough. What I feel goes much further than sadness.

“I’ve just left a Dinamo dressing room where I went to praise the guys and I feel sorry one team that is not my team won the game based on attitude. I feel more than sad.

“Many time I fear my feelings but I don’t blame myself so I always share them.

“The players only realised the game was at risk when they scored the second goal and we went to extra time.”