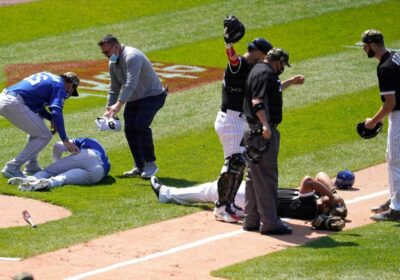 After popping up in the second inning, Dozier jogged out of the batter’s box with his head down. Abreu, the AL MVP in 2020, was running along the first base line while tracking the ball.

The two players ran into each about 20 feet from home plate as catcher Yasmani Grandal caught the pop for the second out of the inning. Abreu and Dozier dropped to the ground and were attended to by the medical staff.

After few minutes, Abreu got up and left the field walking on his own, but looking dazed and with his arms draped around two medical staffers. The reigning American League MVP was replaced at first base by Grandal.

Hunter was replaced at third based by Hanser Alberto in the bottom of the second.