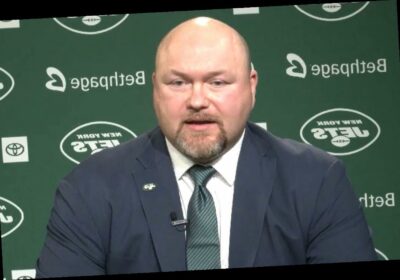 Deshaun Watson wants off Texans no matter what

Robert Saleh could take young Jets star to next level

On the day after the Jets’ season ended, team CEO and chairman Christopher Johnson let everyone know what he thought of general manager Joe Douglas.

“I really think that Joe is the GM we’ve been searching for,” Johnson said on the day he announced the firing of coach Adam Gase. “I have a lot of faith in him.”

Johnson demonstrated that faith by putting Douglas in charge of the search for Gase’s replacement, which ended up being Robert Saleh. Now, Johnson and his brother Woody will put their faith in Douglas to find players for Saleh to snap a 10-year playoff drought.

But is that faith warranted?

Douglas has been Jets GM for 19 months, replacing Mike Maccagnan in June 2019. Douglas has gotten an extended honeymoon with fans and the media in part because of the timing of his hire coming after major roster moves were made for the 2019 season and in part because Gase was blamed for nearly everything that was wrong with the Jets in the last two years.

Now, Gase is gone and Saleh is going to be given his own extended honeymoon. That shifts more scrutiny to Douglas, who is facing a critical offseason. He needs to rebuild a roster bereft of talent and make a difficult decision at quarterback.

With this in mind, it felt like a good time to examine what Douglas has done since joining the Jets and whether Johnson’s faith in him is deserved.

Douglas’ hire was celebrated because he came to the Jets with a sterling reputation and was seen as one of the top GM candidates in the NFL. Douglas had been the Eagles vice president of player personnel for three years after a long stint as a scout for the Ravens and one year as the director of college scouting with the Bears.

Douglas was praised in Philadelphia for helping build the roster of the 2017 Super Bowl champions, in particular the acquisitions of Timmy Jernigan, Alshon Jeffery and Torrey Smith. Eagles owner Jeffery Lurie called Douglas’ hiring in May 2016 a “pivotal moment.”

Douglas also oversaw the drafts in Philadelphia, though GM Howie Roseman had final say. The Eagles’ drafts under Douglas have not worked out. Players such as Derek Barnett, Sidney Jones, JJ Arcega-Whiteside and Andre Dillard have not panned out as the Eagles had hoped. Roseman has gotten most of the blame in Philadelphia, but Douglas played a large role in the Eagles’ drafts.

The Jets went after Douglas largely because of Gase’s desire to bring him to the organization. Douglas initially rebuffed the Jets’ interest, but they convinced him with a six-year contract that pays him more than $3 million a year.

When Douglas got to the Jets, he had to be stunned at how bad the situation was. He has spent much of his initial period on the job cleaning up the contract mistakes made by Maccagnan.

Douglas had to get rid of the bad contracts of Trumaine Johnson (five years, $72.5 million), Quincy Enunwa (four years, $36 million) and Le’Veon Bell (four years, $52 million), along with a few other more minor deals in order to get the team’s salary cap in order. Johnson, Enunwa and Bell still carry a dead-money salary cap charge of $15.7 million combined in 2021.

The biggest moves of Douglas’ tenure so far have been two trades that subtracted talent from the current roster in hopes of adding more talent in the future. He dealt defensive lineman Leonard Williams in October 2019 to the Giants for third- and fifth-round picks. He traded safety Jamal Adams and a 2022 fourth-round pick to the Seahawks in July 2020 for first-round picks in 2021 and 2022, a 2021 third-round pick and safety Bradley McDougald.

It will be years before we know whether these were good trades or not. There is no question Adams and Williams were two of the most talented players the Jets had, and he weakened the current roster by moving them. However, if he ends up nailing the draft picks, it could set the Jets up for future success.

In terms of acquiring players by trade, Douglas landed starting guard Alex Lewis from the Ravens in 2019 and wide receiver Demaryius Thomas from the Patriots, both for late-round picks. Those two were meaningful contributors in 2019 and Lewis was re-signed in 2020. He also made trades for cornerbacks Quincy Wilson and Nate Hairston from the Colts. Neither worked out.

With the season clearly slipping away in 2020, Douglas traded away veterans Steve McLendon, Avery Williamson and Jordan Willis for future draft picks. He deserves credit for getting something, as small as it is, for players who had no future with the Jets.

Douglas’ biggest misses with the Jets have come in free agency. The team desperately needed upgrades last offseason and Douglas largely whiffed with his free-agent signings. His biggest mistake was not re-signing wide receiver Robby Anderson, who landed with the Panthers (two years, $20 million) on a reasonable contract. Anderson had more than 1,000 yards receiving this year and Douglas admitted the Jets erred in their valuation of Anderson, which led to him getting away.

Douglas signed Breshad Perriman (one year, $6.5 million) to replace Anderson, but Perriman missed four games with injuries and was the team’s fourth-leading receiver with just 30 catches.

Cornerback was another position where Douglas whiffed. He signed Pierre Desir to a one-year, $3.75 million deal. Desir led the team with three interceptions but was so poor the Jets released him after nine games.

Ryan Kalil was another big miss by Douglas on the offensive line in 2019. Douglas lured Kalil out of retirement with a one-year deal worth up to $8.4 million during training camp. It was a clear mistake almost immediately. Kalil performed poorly and only played seven games.

Douglas had modest success in signing running back Frank Gore and re-signing cornerback Brian Poole and linebackers Neville Hewitt and Jordan Jenkins. All contributed in 2020. In 2019, he gets credit for tight end Ryan Griffin, who played a big role in the offense.

While many of Douglas’ signings have not worked out, he was wise to hand out a lot of one-year contracts and deals that did not have much guaranteed money beyond 2020. The Jets are not locked in long term with any of the players Douglas signed.

It is unfair to judge Douglas’ first draft class after one season. Time will tell. First-round pick Mekhi Becton looks like a potential Pro Bowl player at left tackle, but he had trouble staying on the field as a rookie. Second-round pick Denzel Mims showed flashes but also had injury problems. Only punter Braden Mann, a sixth-round pick, played in all 16 games.

One curious decision Douglas has made is not changing the scouting staff. He largely has the same scouts who worked under Maccagnan when the Jets drafted terribly. Douglas has hired one scout.

He did remake the front office, hiring assistant GM Rex Hogan, director of player personnel Chad Alexander and Phil Savage as a senior adviser. Douglas also overhauled the Jets scouting system, employing the one the Ravens use. Douglas is also said to be more willing to listen to scouts than Maccagnan.

Now, he’s done that. Douglas has positioned the Jets to have a huge offseason with more than $70 million in projected salary cap space and nine picks in this year’s draft.

With Saleh on board, the next big decision for Douglas is what to do at quarterback. He must decide, along with Saleh, whether to build around Sam Darnold, draft a quarterback or make a play for Deshaun Watson if the Texans make him available in a trade. For Douglas, this decision could define his legacy.

In addition to the quarterback decision, the pressure is on for him to really improve this roster and show whether Johnson’s faith in him was warranted. The focus is now on Douglas. Gase took all the bullets for 2-14 last year. But that shield is now gone. It is time for Douglas to live up to his reputation as a super scout and make the Jets much better in 2021.

The honeymoon is over.