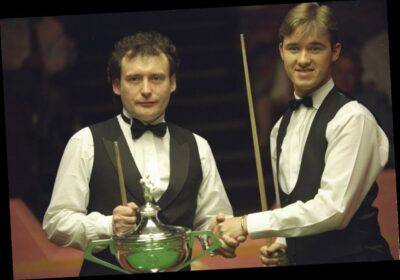 Jimmy White has admitted he was “stunned” when the draw for the first qualifying round of the World Championship pitted him against Stephen Hendry.

The snooker icons, who have been practising together, will play on Monday, with the winner set to face Xu Si in the second qualifying round.

And White has made clear his excitement ahead of the meeting with his former rival.

“Incredible. We’re both stunned by that draw,” he told the Daily Mail. “I had been doing whatever it was I was doing and these two missed calls are on my phone from him.

“We’d been practising together lately but two calls was a bit unusual so I thought something must be up. When I called, he was like, ‘Can you believe it?’

“I can’t get away from him. The last three or four months, he has been getting on it. He has been practising full-time, so it won’t be easy. I have to remember I am playing for my tour card, which is most important here, but yeah, there’s a bit of history there.”

Hendry beat White to secure one of his four world titles in the 1990s, but the latter has insisted he is ready for the challenge.

“We are mates but not in the sense that we’d go on holiday together,” he said.

“I’ve never had a cross word with him. He has always been a really good fella, right from the start. He is a good guy.

“I enjoy the game even more now that I don’t wake up feeling I have an axe in my head. I am sober. I’m not as consistent as I once was but my game is still there in bits and bobs.

“I had a 147 against Ken Doherty a couple of weeks ago. When it connects I can beat anyone.”