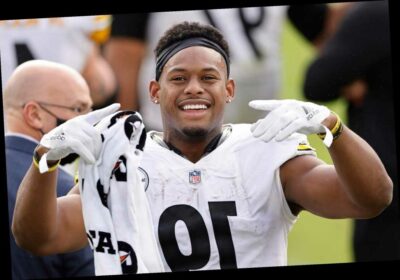 Behind the Jets’ intriguing free-agency bets

Joe Douglas may not be done revamping the Jets wide receivers room.

Douglas reached a contract agreement with receiver Corey Davis, giving him a three-year, $37.5 million deal. Davis was the top target at the position for Douglas, but he may now be shopping for value.

The market for receivers has been softer than expected and there has not been much reported interest in Smith-Schuster. The Jets may view this as a chance to get the former Steeler on a cheaper deal than expected.

Smith-Schuster is only 24 and has topped 800 receiving yards in three of his four seasons in Pittsburgh. His best season was in 2018 when he was a Pro Bowler and had 111 catches for 1,426 yards and seven touchdowns. He had 97 catches for 831 yards and nine touchdowns in 2020.

Smith-Schuster is known for having an active social-media presence, which may give the Jets pause. It is possible they would want to meet with him before making a deal and get to know him a little bit.

If the Jets did sign Smith-Schuster, that would likely lead to the release of Jamison Crowder. Both are slot receivers and there would not be room for them both. Crowder is scheduled to make $10 million this year in the third year of a three-year deal he signed with the Jets in 2019. There is no guaranteed money, though, so the Jets could cut him. If they did cut him, they would save $10.4 million in salary-cap space and he would carry a $1 million dead-money charge.

One intriguing storyline if the Jets do sign Smith-Schuster is his relationship with quarterback Sam Darnold. The two played together at USC. Darnold’s future with the Jets is up in the air this offseason and the team may move on from him. But if they keep him, he could be reunited with one of his college targets.