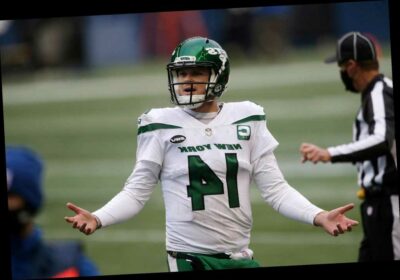 Where Jets can look for some coaching motivation

Jets’ interest in Giants coordinator has his players worried

Douglas praised Darnold but stopped short of committing to him as the team’s quarterback in 2021.

“We’ve got a lot of decisions to make,” Douglas said. “I think that Sam’s going to be a great quarterback. I’m excited to get a head coach in here, go through our process. I had a great conversation with Sam yesterday. I won’t go into the specifics, but I think Sam has a very bright future in this league. … I’m excited about Sam.”

It was a departure from October 2019, when Douglas said Darnold was the only untouchable player on the team’s roster and he would listen to trade offers for anyone else. But Douglas and the Jets now face a major decision at quarterback on whether to stick with Darnold, who had a terrible season, and try to prop him up with better talent around him or trade Darnold and select a quarterback with the No.-2 overall pick in April’s draft.

Douglas won’t be making that call on his own, so he can’t answer that question right now. Douglas and the Jets need to find a new head coach before making any calls on the roster.

Darnold finished the season as the worst-rated passer in the NFL. He threw 11 interceptions and nine touchdowns in 12 games. Adam Gase was fired on Sunday in part because of his failure to get more out of Darnold and the worst-ranked offense in the NFL. Douglas made excuses for Darnold on Tuesday.

“I think Sam faced a lot of obstacles this year, as did everybody,” Douglas said. “Dealing with COVID, and frankly, we had quite a few injuries on the offensive line, at the wide receiver position. I think it was hard for our offense in general to really build the sustained chemistry to really create success throughout the year. I think we had different offensive line groups throughout the season. We didn’t really get a chance to have our top three receivers on the field at the same time until Week 9. I think all of those things impacted not only Sam but impacted our offense. I do think you saw, in the month of December, Sam played a lot of good ball. You obviously saw that we were able to beat two playoff teams and a lot of that is because of how Sam played.”

Douglas and the Jets are now beginning their search for a new coach. The team is known to have requested interviews with six candidates. Douglas is spearheading the search and said he is looking for a “great partner” with high integrity and a vision for what he wants the identity of the team to be.

There are six head-coaching openings around the NFL right now. Most people see the Jets’ opening as near the bottom of that list in terms of attractiveness, but Douglas said the team has some selling points.

“I think there’s a lot of good pieces here,” Douglas said. “I think there’s some good, young core players. I think it’s our responsibility to try to build around the pieces that we have in place. It’s our responsibility to make the best decisions in terms of the leader that we bring in, the players that we choose from in free agency, the players that we draft. Obviously, we’re excited about the resources that we have. We’re excited about talking to a candidate to come to this great city, to this great market and this great fan base and really build something special that hasn’t been done here in a long time. I think these are exciting times for this franchise, for this fan base.”

“I know people outside of this building, they might not see it at this time but he did some really good things here that are going to help us moving forward,” Douglas said.

“I certainly could have done a better job putting this roster together, helping this staff, helping this team succeed,” Douglas said.