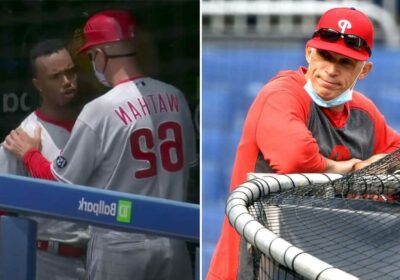 Have faith in home/road splits in this NL East matchup

Former Yankee’s grand slam the difference in this one

Bet on Vince Velasquez to get it done for Phillies

Philadelphia’s mediocre start to the season continued on Sunday with a 10-8 loss to the Blue Jays, though what happened in the dugout was more intriguing than the on-field struggles. Manager Joe Girardi had a disagreement with Jean Segura after the second baseman made a costly error in the bottom of the seventh inning — his second of the game.

Girardi was peppered with questions about the incident after the game, but divulged little.

“That’s a bench conversation, meant for the bench,” Girardi said. “You can ask all you want; you got everything you’re going to get about it. I’m done with it.”

Girardi was shown by television cameras saying something to Segura as he walked away. Segura then had to be restrained by bench coach Dusty Wathan.

“You can ask all you want…I know you’re doing your job, but that’s it.,” Girardi said.

The Phillies lost Scott Kingery in the game after the outfielder ran into the wall and felt dizzy afterwards. At 21-20, the Phillies are in second place behind the Mets in the disappointing NL East.

Girardi is now 49-52 in Philadelphia after taking over the franchise before the coronavirus-shortened 2020 season.