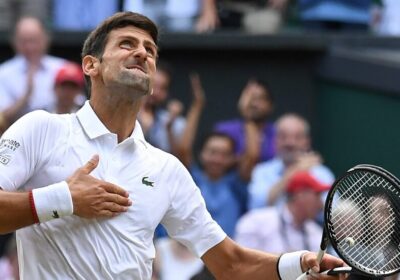 At first glance, this year’s Wimbledon, returning after the coronavirus pandemic shut down the world’s most famed tennis tournament in 2020, looks to be a diminished affair.

No Rafael Nadal. After a bruising defeat to Novak Djokovic in the semifinals of the French Open, Nadal withdrew from Wimbledon, citing a need to heal.

No Naomi Osaka. She announced last week that she would continue her hiatus to care for her mental health.

Roger Federer will stride again on Centre Court, but he is nearly 40 and still shaking the rust from an injured knee. As time passes, so do the chances that Serena Williams will make another winning run.

But Djokovic will be there, fresh from victory at Roland Garros and taking dead aim at the record books. Winning Wimbledon, which begins next Monday, would give him his 20th major title, tying him at long last with Federer and Nadal. It would also keep alive his quest to win four majors in a single year, the Grand Slam, something not achieved on the men’s side in 52 years.

He sits now on the precipice of history, which creates a bind for his many stubborn detractors: Ignore and deride his stirring march, or finally give the fiery and efficient Serb his just due.

Here’s why the haters, and those simply unmoved by his ascent, should give Djokovic reconsideration.

In a sport that breathes aesthetics, that lives on the awe-inspiring flow of points and balletic movement of its most outstanding practitioners, Djokovic’s pared-down approach is as divisive as Rothko’s color blocks. 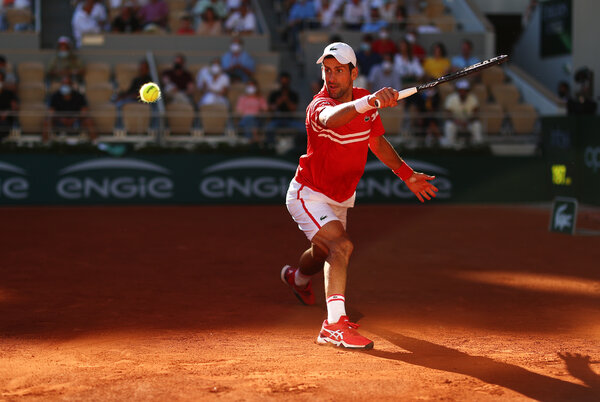 But Djokovic’s game has its beauty. No top player has ever been as flexible, as able, on every surface to twist and bend and turn an outright mad-dash defensive sprint into a sudden attack. More than perhaps anyone in tennis history, Djokovic has refined the foundational core of the game — preparation, balance, weight shifts, footwork.

He is a minimalist, spare and unencumbered by the need for showy flair. Is there an eye-catching aesthetic to that? You bet.

He’s not a robot. He’s Houdini.

There are too many slashes at Djokovic on the internet to count. They say he’s a machine. A robot. Nothing more than the world’s most expansive squash wall.

Yes, he wins … and wins, and wins. Over the last decade, nobody has done more of that in tennis. But there is nothing predictable about how Djokovic goes about it. There are all-out, percussive beat downs — blurs of brilliance that mix power and defense and deftness — as in his straight-sets demolition of Nadal in the final of the 2019 Australian Open.

There are also vivid displays of guts, grit and staying power. His recent Roland Garros title was all about that. But remember, too, the six-hour, five-set marathon against Nadal to win the Australian Open in 2012. And, of course, the comeback from two match points down to nip Federer in the epic Wimbledon final of 2019.

Don’t forget 2010 and 2011, when Djokovic twice rose from the ashes to knock off Federer in the semifinals at the U.S. Open, beating back two match points in both cases. In 2011, Djokovic not only came back from two sets down, he saved the first match point he faced with a from-the-heels forehand return that rocketed past his rival and stung the line for a clean winner.

Federer promptly wilted, losing every remaining game, drooping off as if disgusted by the audaciousness of his opponent.

If you think a profound penchant for Houdini-like escapes is boring, well, maybe you’re beyond convincing.

Yes, he can erupt, shattering rackets, barking like a petulant child at himself, his coaches, umpires and peers. At his temperamental nadir, the 2020 U.S. Open, he struck a ball in anger that hit a lineswoman, leading to his default from the tournament.

At his most heedless, he tried to hold tournaments last year in Serbia and Croatia during one of the worst periods of the pandemic. The exhibitions were canceled after he and other top players came down with the coronavirus.

Djokovic has proved himself all too human in the best, worst and most searching ways. He does not hide from it. Despite the myriad clips of him raging on the court or appearing tone deaf off it — as in April when he said he did not think coronavirus vaccinations should be mandatory on the ATP Tour — his journey has always been public facing.

His flaws, and the openness with which he reveals his interior life, make him more interesting than his near-perfect, more restrained peers.

Without him, tennis would be a monotonous duopoly.

Their lasting connection came to define this era of the sport. Then Djokovic barged and bullied his way in. He is the third wheel, different from Federer and Nadal in almost every way, including the fact that he does not hail from well-to-do Switzerland or Spain, but from an Eastern European country many fans cannot find on a map.

For his haters, all of this is a bitter pill to swallow, one they must choke down with frequency.

Djokovic now holds the upper hand in head-to-head wins over both rivals. Since 2011, he has captured 18 major titles, seven more than Nadal and 14 more than Federer in that span.

After winning this year’s Australian Open, a newspaper headline summed up tennis’s uncomfortable truth: Djokovic might be the greatest of them all.

If a rested Federer can stir the old grass-court magic, maybe we get the title bout everyone wants: a rematch of the heart-pounding 2019 All England Club final.

Novak Djokovic will find himself in a familiar spot, facing a boisterous crowd intent as much on Federer winning as on seeing the Serb crumpled in defeat.

Should recent history hold, Djokovic will raise the champion’s trophy again, another rebuke to the holdouts who refuse to embrace one of the most exciting champions in all of sport.

Wimbledon diminished? Not quite.