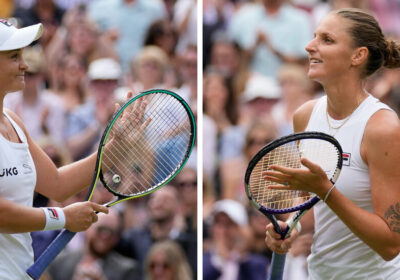 Barty, the women’s world No. 1 who is aiming for her first Wimbledon singles title, will take on a former No. 1 who is chasing her first Grand Slam tournament title. 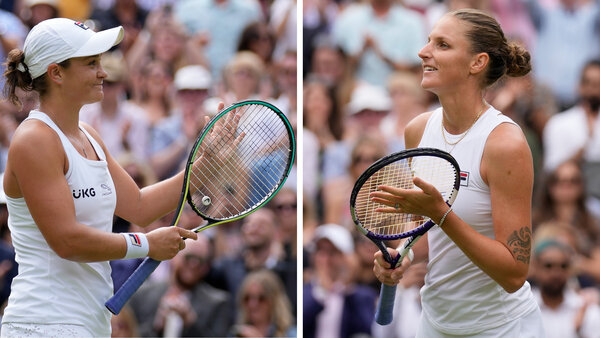 WIMBLEDON, England — Those at Centre Court got two very different tennis matches for their money on Thursday.

The first women’s semifinal, between Ashleigh Barty and Angelique Kerber, was a craft fair, full of slice and guile and often lengthy rallies. The second semifinal, between Aryna Sabalenka and Karolina Pliskova, was heavy metal: thunderous serves, big-bang returns and Sabalenka’s shrieks.

But the goal was the same for all involved, and when the last backhand was chipped and the last forehand smashed, the Wimbledon finalists were the current No. 1, Barty, and a former No. 1, Pliskova.

“I wasn’t sure if it would ever happen, honestly,” Barty said of reaching the Wimbledon singles final. “I think you have to keep putting yourself in position. I think Wimbledon for me has been an amazing place of learning.”

She won the girls’ title here in 2011 at age 15, making it clear she had the potential to be a star in the women’s game. But though her all-court game seems well suited to grass — the skidding slice backhand, the fine serve, the crisp volleys — it has taken her another 10 years to make a serious run at the title.

In 2018, she was beaten in the third round by Daria Kasatkina. In 2019, weeks after winning her first major singles title at the French Open, she was upset in the fourth round by Alison Riske. Last year, Wimbledon was canceled because of the pandemic.

“Probably 2018, 2019, was some of my toughest weeks playing,” she said. “I learned a hell of a lot from those two times. I think a lot of the time your greatest growth comes from your darkest times. I think that’s why this tournament has been so important to me.”

Pliskova, seeded eighth, has had fine grass-court results in the lead-up to Wimbledon, but never managed to peak at the All England Club. She remains the most successful active women’s player not to win a Grand Slam tournament singles title. But after a downbeat season, she has returned to form and will return to the top 10 on Monday.

“I was playing well the last couple of weeks, but sometimes you just need a bit of luck or a bit of something that clicks together,” she said in an interview. “Because I’ve really been feeling well, even in the tournaments before. But somehow it didn’t really work out to get the wins there.”