Irish apprentice Robbie Dolan not getting Curragh-ed away by success Robbie Dolan will never forget the wonderful image of his father leading Grey Swallow back to scale after the 2004 Irish Derby.

Grey Swallow had just got the cash for Melbourne Cup-winning trainer Dermot Weld at The Curragh, the famous track just down the road from Dolan's family home. 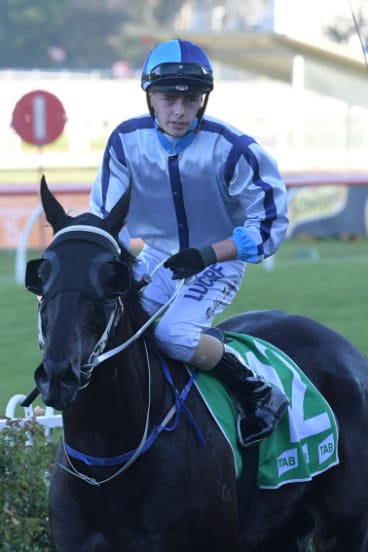 Making his way: Robbie Dolan returns after his win on Arraignment last weekend. The Irishman is starting to make an impression.Credit:AAP

"I used to go to the track all the time, I always wanted to be a jockey but didn't know how to go about it,'' Dolan told The Form.

"My father looked after Grey Swallow. And when Grey Swallow won the Derby, it ignited my whole love for horses.

Dolan did a bit of boxing growing up but realised ''I wasn't much good''.

So when he was 17, Dolan flew to America to visit his older brother, Barry, who trains horses in Florida, and realised there would be no changing his mind about being a jockey.

He came home, joined the Irish apprentice school, the Racing Academy and Centre of Education, or RACE, and never looked back.

Successes were few and far between in Ireland. His strike rate was as impressive as any Irish joke – five winners in about 100 rides.

But now 22, Dolan is making a name for himself on the other side of the world.

On a sponsorship visa with trainer Mark Newnham, Dolan brought up his seventh city winner at Rosehill last weekend.

And he has a good chance to build on that tally with some decent chances on Saturday at the same western Sydney track.

Plenty of good judges expect Dolan to make the grade, and the youngster has no desire to return home any time soon.

Newnham said there was a lot to like about the kid who gave him no trouble and even found himself a local girlfriend.

"He's good fun to have around the yard, he's never any trouble and works hard,'' Newnham said.

"He's got good ability to ride a horse back in the field. A lot of apprentices who go through their claim do it just riding horses on the pace and using the weight advantage that way.

"But he rode a horse of John O'Shea's at Canterbury last Friday night [Southern Lad], he was three back the fence, which is not ideal at Canterbury coming to the corner, but worked his way to the outside and got it home. He's done it a few times. That's an indication they've got more to their riding than just the claim.''

Dolan will ride Newnham's Sweet Victory, who resumes in the TAB Rewards Handicap and will hopefully target Gosford's Belle Of The Turf third-up after Christmas.

According to Dolan, Sweet Victory would be better for the run but had enough natural ability to give cheek and land the cash.

"She's definitely classy enough to win first-up, obviously she'll want it a bit further, but on ability I wouldn't write her off,'' Dolan said.

The pick of Dolan's rides is Kris Lees' Turnberry, who has won and placed his two runs back this preparation at the track and will be one of the top chances rounding for home in the Christmas At The Gardens Handicap (1500m).

"He seems to be doing a lot right at the moment, he placed last start at Rosehill, he gets up on the speed and makes his own luck,'' Dolan said.

"I can see the favourite [Reflectivity] leading, but if we can sit outside the leader and kick off its back, we're a good chance.''

Dolan made the most of his three-kilo claim to lift Arraignment across the line in the last at Rosehill last week, and will look to round out the card with another Joe Pride runner, Discussions.

"I rode him on the Kensington track, he gave me a beautiful feel when he ran third, there seems to be a bit more speed in this race and he might not get it as easy in front,'' he said.

"If we can get to the front without too much hassle, he can go at his own pace and bowl along in front. He actually gets in well at the weights and has a lot less than what he carried last start.''