Home » Sport » ‘I wasn’t at my best’: Dwyer has Diamonds in sight after unlikely breakout year

‘I wasn’t at my best’: Dwyer has Diamonds in sight after unlikely breakout year

When Australian shooter Kiera Austin went down with an ACL injury in the Giants’ season opener, all eyes turned to 19-year-old Sophie Dwyer.

Dwyer had been expecting to play a few minutes here and there in her first Super Netball season; Austin’s injury meant she was expected to play every minute of every game. 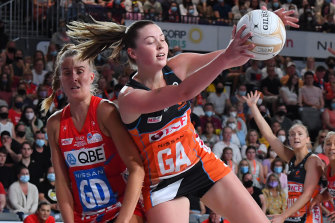 With both hands: Giants goal attack Sophie Dwyer gathers the ball during the 2021 grand final.Credit:Getty

Dwyer, who re-signed with the Giants this week, says the experience of playing in a grand final – which the Giants lost 63-59 to the Swifts – will stand her in good stead but that there were plenty of lessons to learn.

Earlier this week, Austin spoke about the atmosphere before the Giants ran out onto the court for the grand final. She said the nerves were palpable before the game: a product of a lack of finals experience within the room.

“That step up to finals was quite big, the intensity is definitely on another level. So many of us hadn’t played finals before,” Dwyer said.

Those nerves showed within the first few minutes. The Giants had led the league for most of the year but it was the Swifts that opened with six unanswered goals in the first three minutes.

Giants coach Julie Fitzgerald was forced to call a time-out in a desperate bid to reset her side. It worked, but the side struggled to recover from the shaky start.

Dwyer admitted the Giants’ lack of experience played a part in their loss.

“We didn’t want to focus on that too much, because we knew that regardless of experience that we’d been playing really great netball all year, and we could win,” she said.

“No one can play perfect games all the time and I did take a lot of learnings from that, because I did feel I wasn’t at my best, but what we know we can produce definitely reflected on that game. And we will be ready to go for next year.”

Dwyer is hopeful for plenty of court time even if Austin returns this season. She is training with the Diamonds reserve squad on the Sunshine Coast at the moment and hopes it can be a stepping stone to the national team.

“I’m really looking forward to continuing my development because as much as it was very good [first season], I am very young and have a lot more development in me,” she said.

“I have really been proud of myself and how I was able to step into [Austin’s] shoes. As much as it was really disappointing not to have her, it gave me an opportunity which I have tried to grab with both hands.”