Home » Sport » How many fans will be at Tyson Fury vs Deontay Wilder?

How many fans will be at Tyson Fury vs Deontay Wilder? 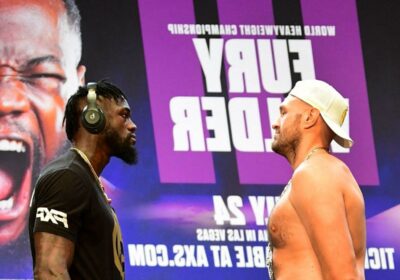 Tyson Fury and Deontay Wilder will complete their heavyweight trilogy this weekend, with the WBC title on the line once again.

Fury and Wilder fought to a controversial split draw in December 2018, before Fury stopped the American in the seventh round of their rematch in February 2020.

In doing so, Fury handed Wilder his first loss and claimed the WBC heavyweight championship, which the undefeated Briton will defend against the 35-year-old at the T-Mobile Arena in Las Vegas this Saturday night.

The T-Mobile Arena holds 20,000 fans, with a full-capacity attendance expected for Fury-Wilder III.

Limited tickets are still available for the fight just a matter of days out, and Fury has called on US President Joe Biden to relax Covid-related travel restrictions to allow British fans to attend.

Travel guidelines in the United States are not currently set to be eased until November to allow fully-vaccinated foreign citizens into the country more freely.

“I’ve still got my fingers crossed that at the last minute President Biden will open the borders to my supporters,” Fury said, per the Mail.

“I’ve been putting the pressure on for the Brits to be allowed to invade Las Vegas again and make it like my second fight with Wilder.”