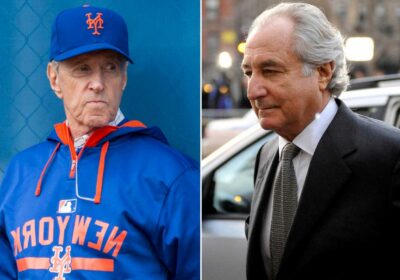 The Knicks refuse to go away

Imperfect replay system is still better than none at all

Mets, Michael Conforto aren't about to return this gift

What makes this Knicks downer so tough to swallow

The thing that’s most important to remember is that while the families that used to own the Mets might have been the highest-profile victims — and, before that, beneficiaries — of Bernard L. Madoff’s made-up math, they were hardly the face of that fraudulent financial calamity.

No, that would be the lion’s share of the 37,000 victims in 136 countries, the nameless, faceless folks who entrusted Madoff with their retirement, with their life savings, with their families’ long-term well-being, and wound up broken by Madoff’s perfidious plot. For years after Madoff’s lie was exposed on Dec. 11, 2008, we saw their faces, often streaked with tears, usually ransacked by ruin. It’s when you saw those faces on the nightly news when you realized the 150-year prison sentence Madoff received for his crimes was a slap on the wrist. Or a tickle.

The Wilpons and the Katzs? They had happy endings. They kept their baseball team, then sold it off for $2.4 billion. No tears for them, laughing all the way to guaranteed generational wealth.

But this is the sports section, and the Mets are one of the main stars of this section, and so if we are going to talk about Madoff at all after he died at 82 of natural causes Wednesday following a longtime bout with kidney disease, we talk about him because of what he and his relationship with Fred Wilpon and Saul Katz did to the Mets after Dec. 11, 2008 — turning a big-market supernova into an austere shadow of what it had been and what it was supposed to be.

Madoff himself insisted that his friend Wilpon never knew about the sinister Ponzi scheme he had been cooking. But Wilpon was more than happy not to question the guaranteed 12-to-15-percent return on his investments each year, something he could count on regardless of the economic climate. Bull or bear market, recession or recovery, Madoff’s clients were always guaranteed a great year. At the very least Wilpon — a man who was his own self-made success story in business — was grossly and almost irresponsibly naive.

Well, let’s be straight about it: this nearly ruined the Mets. It colored everything they did as an organization from 2008 until at least 2015. Things were done on the cheap. Talent pursuits were always done cautiously with the knowledge that the Mets — playing in earth’s No. 1 media market — would never make the last big bid because they had neither the heart nor the resources for it. Infrastructure suffered. It isn’t just God in the details but dollars, too, and so the details withered and frayed.

It is useful to recall that on the day the feds busted Madoff the Mets were coming off arguably the most successful three-year run in their history having won 274 games in three years, drawing almost 11.5 million fans to old Shea Stadium to see a batch of pricey stars — Carlos Beltran, Carlos Delgado, Tom Glavine, Pedro Martinez — and a couple of kids they’d breezily bought out through the balance of their arbitration years, David Wright and Jose Reyes. The Mets had learned to spend freely and smartly and had grown to enjoy it.

So much so, in fact, that it had been the let-the-good-times-roll-forever culture that somehow moved them — eight full years before Madoff’s arrest — to agree to the epic deferred-payment deal that turned less than $6 million in due salary into the 25-year Bobby Bonilla Annuity. That deal requires the Mets to write a check for $1.19 million to Bonilla every July 1 until 2035. Once a year the rest of baseball get a big laugh out of this.

But starting in 2009, there was nothing funny about what became of the Mets, run on a shameful shoestring, the team incurring more debt just to stay ahead of the bill collectors every month. There was genuine fear among the Wilpon and Katz families what they would be forced to pay as restitution once Madoff Trust trustee Irving Picard sifted through the wreckage. The number settled at — $162 million — seemed at the time both generous and onerous.

That’s when the fans really first started to make public their pleas for the Wilpons to sell. It was never personal: the reasoning was simple and sound. You either have enough money to run a pro sports team — and, specifically, one in New York City — or you don’t.

There was precedent. Baseball had forced a scalawag owner named Frank McCourt to sell one of its other jewel franchises, the Dodgers. Seeing that aggressive action — and then seeing what became of the franchise after McCourt and his parsimonious penny-pinching were broomed aside — Mets fans acted like kids outside a locked candy store. Yet two commissioners — first Bud Selig, later Rob Manfred — stubbornly stood by the Mets’ owners’ sides as advocates.

In the end, the $2.4 billion Steve Cohen ponied up was too much for anyone to ignore, certainly for families that had long wanted to be made right financially by what they endured in the Madoff maelstrom. Cohen signed Francisco Lindor to a $341 million contract on the eve of this season. When engaged on Twitter about adding a retractable roof to Citi Field the other day he estimated it would cost $300 million — and more interestingly, didn’t say he thought it a bad idea.

The plain truth is this: for now, for the immediate future, the Mets represent New York City in might again, and not just in name. They no longer act like they are headquartered in Des Moines the way the Madoff Mets were required to. That isn’t anywhere near the darkest legacy he leaves behind. In New York sports, though, it is all he’ll be remembered for. That’s enough.