How a Baseball Outsider Became the Yankees’ Pitching Guru The man who led the Yankees’ pitching staff through the seesaws of this truncated regular season, and who will soon guide them into a unique postseason, never played professional baseball. The highest level he reached was pitching for the College of the Holy Cross. His earned run average over four years there: 6.54.

His degree is in psychology and philosophy. His first foray into learning about the intricacies of the body’s movement came from online forums, books and DVDs.

Before Matt Blake became a self-taught pitching instructor just over a decade ago, he was a salesman for a marketing company in his hometown, Concord, N.H. As recently as five years ago, he was coaching high school baseball, and now he is the Yankees’ pitching coach.

Baseball can be a slow-moving, ritualistic sport. Things are done a certain way because they always have. In recent years, though, some of the most innovative work in the sport has come from outside the professional ranks, so clubs have snatched up coaches from colleges and private training facilities, like Driveline Baseball or Cressey Sports Performance.

“When you’re in the private sector, you’re a speedboat,” Blake said in an interview earlier this year. “You can go wherever you want as fast as you want and it’s your decision how much you want to spend and who you want to learn from and where you want to go and what you want to do.”

But professional baseball, he said, is “a tanker in the middle of the ocean. If they want to go a different direction, they have to turn 150 employees around, and a lot of them have been doing it a long time.”

The Yankees may be a tanker, but they were already turning when Blake arrived. Over the past two years, they hired several people from outside professional baseball to help them with what General Manager Brian Cashman often calls the “new world order” of Major League Baseball. 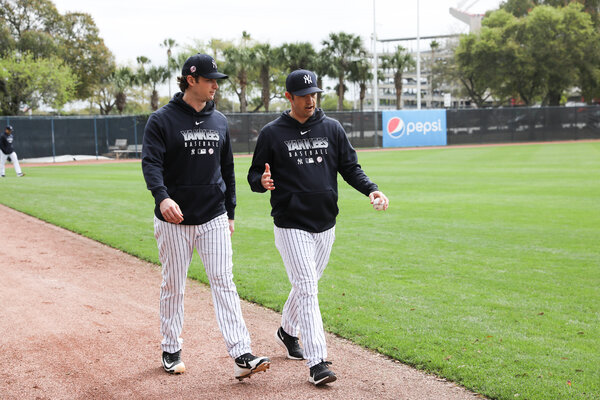 When the Yankee set out last winter to replace Larry Rothschild, their longtime pitching coach who skewed old-school in his coaching style, they interviewed two college coaches. But Blake, 35, the Cleveland Indians' director of pitching development, set himself apart with his résumé and ideas.

In 2016, he jumped from baseball’s private sector — he was the pitching coordinator at Cressey Sports Performance — to Cleveland. There, he became an important piece of their envied pitching factory, helping develop standouts like Shane Bieber, Mike Clevinger and Zach Plesac, until the Yankees lured him away in November. Blake is now one of four pitching coaches in the major leagues without professional playing experience.

Sitting in an office at the Yankees’ spring training facility in Tampa, Fla., before the pandemic struck, Blake acknowledged that it had been a wild journey from leaving his sales job to setting up his own pitching instruction business to becoming a sought-after pitching guru who landed with the Yankees.

“But on the other hand, every step made sense,” he said. He developed a unique skill set, he said, that combined an understanding of the movement of the body, video analysis, analytics, pitching strategies and strength and conditioning.

In other words, Blake became the epitome of a modern pitching coach. He grew up understanding the needs of the contemporary pitcher, from using weighted balls to high-tech cameras. In Cleveland, he was known for his ability to translate advanced data into usable instruction.

“He’s extremely intellectual in regards to baseball, pitching, people and personalities,” Bieber, the leading contender for the 2020 American League Cy Young Award, said earlier this year. “We loved having him here.”

While Blake may not have as much experience with mound visits or in-game management, the Yankees’ ace Gerrit Cole said Blake had caught up quickly this season. Blake arrived, Cole said, with “a large tool belt.”

“He’s been around enough people to talk simple pitching, like ‘stay back’ or ‘get through the baseball,’” Cole said, adding: “He touches all parts of the realm.”

From a young age, Blake gravitated toward his coaches. While working a sales job for nearly two years after graduating from college in 2007, he was earning more money teaching pitching to youth players on weekends. He was also devouring coaching resources, from books to online forums to videos, of pitching instruction from experts like Ron Wolforth and Paul Nyman.

Fascinated by a DVD in which Cressey broke down the movements of a player joint by joint, Blake reached out to him in 2009 through a mutual friend. Cressey introduced Blake to the head coach of Lincoln-Sudbury Regional High School in Massachusetts. Blake became the school’s pitching coach for six years, winning a state title in 2011.

At the same time, Blake was building the pitching arm of Cressey’s training business into one that attracted the two-time Cy Young Award winner Corey Kluber, then with Cleveland, during off-seasons.

“He read all the books on my bookshelf, he sat in on our in-services, he asked me tons of questions, we traveled to seminars together,” said Cressey, who was also hired by the Yankees in January to serve as their director of player health and performance. “It allowed him to really learn how the body works when he didn’t really have a background in kinesiology and biomechanics.”

Cressey said Blake was particularly adept at reverse-engineering pitching mechanics. He went beyond typical suggestions to tweak a grip or adjust a strategy: With a deeper understanding of the body than traditional pitching coaches, Blake used video to identify limitations in the pitcher’s body and came up with ways to address it in their training.

“It was kind of the philosophy component of keep digging until you get the ground truth,” he said, referring to his college studies.

Blake’s even-keeled nature during his first season with the Yankees — in a pandemic-shortened season, no less — has impressed Manager Aaron Boone, though he acknowledged that Blake was still learning the intricacies of a major league season and communicating daily with a sprawling staff like the Yankees’.

“Everything I’m seeing is that he’s going to be really good at this,” Boone said recently.

From the beginning, in his first meetings with players in spring training, Blake emphasized that he hoped his expertise would be a supplement, not a replacement, to theirs or other coaches.

“There’s definitely a level of respect for the talent that you’re coaching,” he said. “I have not played the game at that level. But if you’re upfront and authentic about that and not try to pretend that you did, I don’t think players care anymore.”

Blake’s impact was felt immediately. During spring training workouts, Yankees reliever Chad Green said he noticed more cameras than ever every time he took the mound. Weighted balls were more accepted. During the three-month pause because of the pandemic, Blake kept tabs on players’ workouts through a shared Google Doc, text messages and phone calls.

After any appearance this season, pitchers are given a report on their performance, which Cressey said he also looks at every time because it is useful for spotting any differences in a player’s body. Before starter James Paxton landed on the injured list last month with a forearm injury, he said Blake helped him snap out of some struggles by digesting analytics to understand what physical adjustments were needed to get his pitches to behave more like normal.

“One of the toughest things about getting coached by a pitcher that went far is that they always think that their way is the right way,” Ottavino said. “There’s so many different ways to pitch in this game, but he’s looking at each person individually.”