Home » Sport » ‘Here We Are, Again’: The Giants Stick to a Formula That Works

‘Here We Are, Again’: The Giants Stick to a Formula That Works

Look closely and you can still see glory floating like ticker tape in the wind.

Anthony DeSclafani tossed a gem June 11 in Washington, finishing what he started for a rare complete game. After the final out, here it came: Catcher Buster Posey walking to the mound to offer the prize that every Giants pitcher wants.

For San Francisco, which won World Series titles in 2010, 2012 and 2014, the simple act packed with so much emotion is known as a Buster Hug.

“The ironic thing is, I’m really not much of a hugger,” Posey said, chuckling, during a conversation the next day. “I try to save those for big moments.”

Those moments — the smiles, the wins, the hugs — are happening more and more frequently for the Giants, who have the best record in the majors and have seen their playoff odds (according to FanGraphs) increase from 5 percent at the beginning of the season to 72.3 percent entering Sunday’s games.

Also notably beating the odds are three graybeards, each of whom is in the final year of his contract. Posey, shortstop Brandon Crawford and first baseman Brandon Belt: three enduring amigos for the three-time champions. (Posey was a major player in all three World Series wins; Crawford and Belt were there for the last two.)

“I think if you told any of us 10 years ago that you guys will be in the starting lineup together in 2021, we would have been tickled about that,” Posey said. 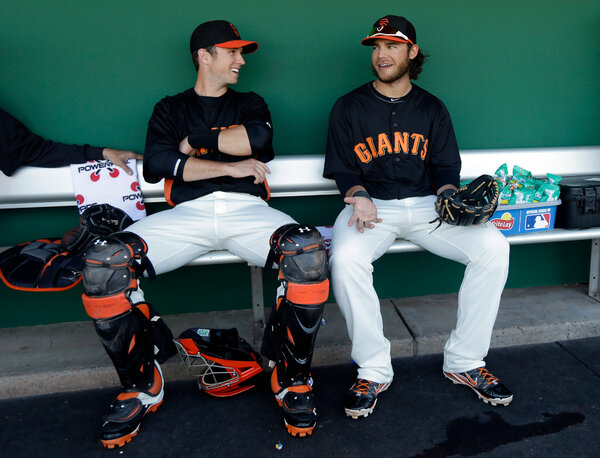 Posey, 34, opted out of last summer’s pandemic-shortened season after he and his wife, Kristin, adopted identical-twin girls who had been born prematurely. Now in the final year of a nine-year, $167 million deal with a club option for 2022, Posey, following a 2018 hip operation that threatened his baseball golden years, is having possibly his finest season since 2012, when he won the N.L.’s Most Valuable Player Award.

Crawford, 34, is producing the best overall season of his career and this month became the club’s career leader in games played at shortstop, breaking a record previously held by the Hall of Famer Travis Jackson, who retired in 1936. Crawford’s six-year, $75 million deal expires after this season.

Belt, 33, slowed by an oblique strain earlier this year, continues as a presence at first base with an on-base plus slugging percentage (.907) that ranked him second the team through Saturday. He is in the last months of his five-year, $72.8 million deal.

“I think there’s something pretty deep-seated in being part of a winning culture,” said Larry Baer, who joined the organization in 1992 and currently is the club’s president and chief executive. “There was a period, and it seems crazy now, but as you went through 2010, 2012 and 2014, where none of those players lost a playoff series. It was like eight or nine in a row for Buster.

“Then, in 2016 we won the wild-card game versus the Mets and then we had a tough loss to the Cubs. But the point is, I think there is a really strong ethos to having been in a winning culture and knowing what it takes to get through a long season and a winning environment.”

What’s especially striking, in what feels as if it could be the last ride for San Francisco’s championship core, is the fact that much of the baseball world has ignored their continuity, spending the last five seasons agonizing over the future of the Chicago Cubs, who won the World Series in 2016. Kris Bryant trade rumors have become a fixture like Wrigley’s ivy. When the Cubs nontendered Kyle Schwarber last winter, the conjecture was that, financially, another of the team’s stars would have to go, with Anthony Rizzo, Javier Baez and Bryant all eligible for free agency after 2021.

Meanwhile, Posey, Crawford and Belt blissfully moved toward the end of their contracts, flying under the radar despite the fact that they did what the Cubs’ core couldn’t: win multiple World Series titles.

“I kind of feel like that’s normal for us,” Crawford said. “We don’t get as much national coverage as the Cubs, Yankees and teams on the East Coast, but we find a way to kind of join together and put a good team on the field and play good baseball and win games. I feel like that’s what’s happening this year, too.”

The end of their era was supposed to have been when the maestro, Bruce Bochy, retired and the Giants replaced him as manager with Gabe Kapler following the 2019 season. A year earlier, they had hired Farhan Zaidi as president of baseball operations, replacing Brian Sabean, who as general manager had been the architect of the three titles. The rebuild was on in earnest, the urgency flashing in the neon light of a humiliating 64-98 finish in 2017.

“Brian and Boch are still with the organization, and we have the benefit of their advice and wisdom,” Baer said. “But when you make changes, other changes come with them and what you hope to do is that the new regime listens and studies and understands.”

Though most of the names have changed, what’s familiar about these Giants is pitching and defense carrying the day.

Veteran starters like Kevin Gausman (8-1, 1.51 E.R.A.) and DeSclafani (7-2, 3.01) have made everyone look smart. Even after a rare blowout loss on Saturday, Giants starting pitchers had the fifth-best E.R.A. (3.23) of any rotation in the majors, trailing only the Mets, the Los Angeles Dodgers, the Chicago White Sox and the Miami Marlins.

And behind those starting pitchers is a highlight-reel defense. Two Fridays after robbing Albert Pujols of a home run in Dodger Stadium, left fielder Mike Tauchman, acquired from the Yankees in an unheralded trade in April, went over the fence again to steal a homer from Washington’s Juan Soto, preserving DeSclafani’s 1-0 win.

Living with one cleat in the past and one cleat in the future is a difficult ask. Consider the Philadelphia Phillies — the Giants’ opponents in a three-game series this weekend — who, following five consecutive N.L. East crowns and two World Series appearances (one title), haven’t finished over .500 since 2011. Or the Tigers, who, following two World Series appearances and four A.L. Central titles from 2006 to 2014, haven’t had a winning percentage higher than .411 in five years.

“They’ve been really thoughtful about how to marry the past to the future and also move into different areas of focus in baseball operations because the game is changing dramatically,” Baer said of Zaidi, Kapler and the rest of the Giants’ front office. “I won’t say it’s been completely seamless, but it’s been as close as anybody could expect.”

Rocky terrain is familiar to Kapler. His debut as a manager came with the Phillies, where he and his immediate predecessor there, Pete Mackanin, lived in the shadow of the beloved Charlie Manuel. With the Giants, Kapler had no buffer, taking over directly from Bochy.

“It was pretty straightforward,” Kapler said. “I knew that it was not going to feel good to fill Bruce Bochy’s shoes because nobody would be able to do that. My goal was to blend in and be a part of something already very much in progress and contribute any way I can.”

The difference? In San Francisco, Kapler was gifted with a battle-tested, October-decorated core of veterans that continues to tug the thread through the years.

“I feel lucky to watch them have a second peak,” said Kapler, whose regular dialogue with the veterans — especially Posey and Crawford — includes workload management and mapping out days off.

Over time, the thread has threatened to fray. While Posey watched the shortened season from home, Crawford was yo-yoed around by his new manager, getting pinch-hit for and not starting against some lefties.

“I didn’t have a good year in 2019. I understand their way of thinking coming into last year,” Crawford said. “But my argument was, I made some changes and I’d like to see how it works out.”

Crawford’s play this year has completely changed the conversation. (“I think he’s been the best shortstop in the league for the last 10 years, defensively for sure,” Posey said. “He’s a 34-year-old getting to balls some 25-year-olds can’t get to.”) And Posey is back with no regrets, looking as if he visited the Fountain of Youth.

Throughout everything, they have had each other, with a brotherhood cemented by the years and cured by the challenges. Posey, Belt, Crawford and the veteran third baseman Evan Longoria, acquired in trade from Tampa Bay before the 2018 season, communicate nearly every day, in season or out, verbal or text. Sometimes, it’s simply a look.

“We’ve played so many games together we kind of know what each other’s next step is going to be,” Belt said. “And if you have an idea of what happens next, it tends to relax you. You’re more confident, and that translates into wins, in my opinion.”

That shared history goes beyond the field.

“Our kids know each other and hang out with each other, our wives hang out, it’s all part of the family now,” Crawford said.

“That’s the special thing about this,” Posey said. “There’s just a few people you get to play with in this game that you know will be friends for life.”

Now, in a reopened California that will allow for full-capacity crowds at Oracle Park beginning June 25, these Giants could have staying power. Returning fans just might see a playoff charge in a season that, back in March, when the baseball world was swooning over the Dodgers and the Padres, appeared to offer little more than a lump-in-the-throat chance to watch the final days of Crawford, Belt and, maybe, even Posey in Giants uniforms.

“For us veteran guys, we’re trying not to even look at it as a rebuild,” Crawford said. “We’re trying to continue our great careers that we’ve had with the Giants. I know it’s still early and there’s more than half a season to go, but everybody talks about the Dodgers and the Padres and here we are, again, in early June in first place.”

Certain moments stir memories. Crawford helping turn a crisp double play conjures up the key twin-killing early in Game 7 of the 2014 World Series. A Belt long ball can elicit flashbacks to his 18th-inning homer in Nationals Park to win a division series game earlier that autumn.

But in San Francisco, little can top the Buster Hug, spawned by Posey’s celebratory embraces of pitchers Brian Wilson, Sergio Romo and Madison Bumgarner after the World Series titles, Matt Cain following his perfect game in 2012 and Tim Lincecum (2013) and Chris Heston (2015) after no-hitters.

Besides winning a World Series or firing a no-hitter, what, exactly, does it take to get a Buster Hug from a player who typically carries himself with the quiet reserve of an accountant?

“Oh, I don’t know if I can put parameters on that,” Posey said, laughing. “It just kind of happens.”

The same goes for winning seasons by the Giants, as their core rolls ever onward.