Home » Sport » ‘He struck out a guy on a broken leg’: Atlanta win game one but lose star pitcher in World Series

‘He struck out a guy on a broken leg’: Atlanta win game one but lose star pitcher in World Series

At a time when old-fashioned pitching aces have become a rarity in baseball, Atlanta have lost one of the game’s best post-season performers for the rest of the World Series.

Charlie Morton, Atlanta’s veteran right-handed starter, sustained a fractured right fibula after he was struck on the leg by a sharply hit ball off the bat of Yuli Gurriel in the second inning of Atlanta’s 6-2 victory over the Houston Astros in game one of the World Series on Tuesday night (Wednesday AEDT) at Minute Maid Park. 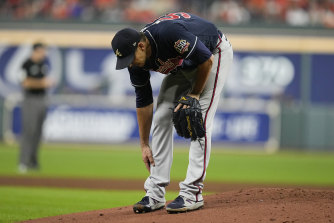 Charlie Morton leaves the game in the third inning. X-rays revealed he had a fracture.Credit:AP

X-rays performed at the stadium confirmed the fracture, and the 37-year-old Morton was ruled out for the rest of the best-of-seven series.

“For us to lose him in game one, it’s a dagger,” Atlanta catcher Travis d’Arnaud said, “But he’s still going to be there with us, cheering us on and still trying to teach us everything that he’s learned along his path and his career.”

After the ball struck Morton, he ran to cover first base without a noticeable limp and remained in the game. He proceeded to strike out Chas McCormick and then induced a line-drive out from Martin Maldonado to end the inning.

Between innings, Morton received some medical attention, and Atlanta manager Brian Snitker indicated the pitcher had an initial X-ray that was negative. Morton then threw a ball against a wall in the tunnel to the dugout, Snitker said, and proclaimed himself ready to return to the game. He said it hurt more to run than to throw. 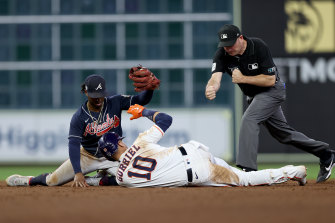 “That X-ray, when he went back out, didn’t show anything,” Snitker said and added, “Well, he got one after he came out of the game and felt hurt.”

In the third, Morton struck out Jose Altuve, but landed awkwardly after throwing the final pitch of the at-bat, reaching down to the spot where he had been hit by Gurriel’s liner.

Moments later, Morton hobbled off the field, ending his season 16 pitches after the ball had hit him. He was replaced by A.J. Minter.

“He struck out a guy on a broken leg,” Minter said. “It’s pretty remarkable.”

Snitker suggested that the fracture might not have developed until Morton went back for the third inning.

“I’m not a doctor and all that, but I don’t know that it was broken when he did that,” the manager said in reference to the outs recorded in the second inning. “I mean, it was stressed, but he felt OK.”

Atlanta will be allowed to replace Morton on the World Series roster with another pitcher, but it has lost one of the pillars of its pitching staff, and someone with notable success against the Astros.

In 14 major league seasons, including two with the Astros, Morton has established himself as a clutch post-season pitcher and has done particularly well against his former team.

Morton has also been a strong influence on his teammates, and most likely will continue to provide support and advice to his fellow pitchers for the rest of the series. Max Fried, Atlanta’s game two starter, called Morton a calming influence before game one. 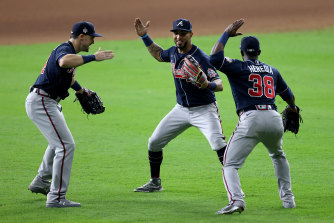 “Especially when you go into really emotional games, especially when it comes to play-off games,” Fried said, “to be able to look to him in these circumstances is really, really helpful.”

Morton pitched for Houston in 2017 and 2018, and won game seven of the 2017 World Series with four splendid innings in relief. He left a strong impression as a terrific teammate.

“The best you can ever have,” Altuve, Houston’s second baseman, said before the series began. “He’s that good. He’s amazing. I only have good things to say about him.”

Morton’s final pitching line of the 2021 season was 2 1/3 innings in which he allowed one hit and no runs. He walked two and struck out three, but what will never be shown in the box score is whether he recorded his final three outs on a broken leg.