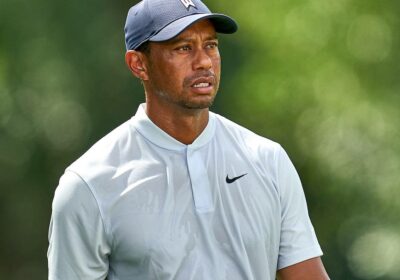 Woods was reported unconscious in a mangled SUV after he crashed the vehicle in Southern California, suffering a shattered ankle and two leg fractures, and has undergone several surgeries since the incident.

McIlroy has provided a rare update saying Woods is on the mend.

‘I’ve spoken to him a little bit,’ McIlroy said in an interview on The Tonight Show with Jimmy Fallon.

“He’s doing better. I think all the guys have reached out to him and hopefully if things go well over the next week or so he might be able to get home and start to recover at home, which would be great for him, see his kids, see his family.

“He’s doing better and just I think all of us are wishing him a speedy recovery at this point,” McIlroy added.

The Northern Irishman was one of several PGA Tour players who wore red in the final round of the Workday Championship tournament in Florida earlier this month to honour Woods, who traditionally dons red and black for every final round.

Woods is from the Los Angeles area and was back home to host his PGA tournament, the Genesis Invitational at Riviera Country Club, which ended two days before the crash.

He was driving an SUV loaned to him by the tournament when he struck a raised median, crossed through two oncoming lanes and uprooted a tree. The crash occurred on a downhill stretch that police said is known for wrecks.

Sheriff Alex Villanueva has said Woods was driving alone in good weather, there was no evidence of impairment, and the crash was “purely an accident.” However, depending on what is found on a data recorder, Woods could face a misdemeanour driving charge or a traffic citation.