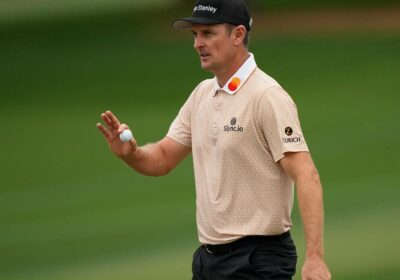 Regular updates of the third round of the US Masters at Augusta.

Masters rookie Will Zalatoris has joined Justin Rose and Hideki Matsuyama as co-leaders with a birdie at the 10th to move to 7-under. Rose, who had a two-shot lead earlier in the day, is even through 10 holes.

Former world number one Justin Thomas may have thrown away his hopes of a Masters title after recording an eight at the par five 13th to move from 4-under to 1-under and outside the top 10.

Play has resumed at the Masters after players were called off the course at Augusta for a thunderstorm. Justin Rose remains at 7-under where he has been joined by Japan’s Hideki Matsuyama.

Matsuyama is 3-under for the day and jumped into the co-lead with birdies at the 11th and 12th holes. Will Zalatoris and Marc Leishman are a shot back at 6-under.

Play has been suspended at Augusta due to inclement weather. Thunderstorms are predicted in the area for the next two hours.

Justin Rose was on the seventh green facing a lengthy birdie putt. The Englishman holds a one shot lead at 7-under ahead of Will Zalatoris.

Leader Justin Rose was 9-under not that long ago but has slipped back to 7-under with back to back bogeys on the front nine. The Englishman now has a one shot lead over Aussie Marc Leishman and American Will Zalatoris, who is playing in his first Masters.

Rose is even through the day following two earlier birdies.

Corey Conners, Hideki Matsuyama and Justin Thomas are a further shot back at 5-under.

Corey Conners has made a move at the Masters, with just one swing.

The Canadian made a hole-in-one at the par-3 6th hole on Saturday, getting him to 3 under for the day, 5 under for the tournament and within two shots of leader Justin Rose. Conners’ ace came just moments before Rose teed off to begin his third round.

Conners’ tee shot at the 180-yard hole bounced once, then rolled smack into the pin and dropped into the cup. It was the second hole-in-one at this year’s Masters; Tommy Fleetwood had one at the 16th hole in Thursday’s opening round.

Conners had the 33rd hole-in-one in Masters history and the sixth at No. 6. The last player to ace that hole during the Masters was Jamie Donaldson in 2013.

Phil Mickelson has broken 70 yet again at Augusta National.

The three-time Masters champion shot a 3-under 69 on Saturday, getting him back to even for the tournament.

It was his second consecutive day of shaving three shots off the prior round’s score: He opened with a 75, made the cut on the 3 over number by shooting 72 on Friday, then had a four-birdie, one-bogey day Saturday.

It was Mickelson’s 33rd round in the 60s at Augusta National, six shy of matching Jack Nicklaus’ Masters record.

Francesco Molinari also posted a 69 on Saturday, also getting him even going into Sunday’s final round.

Billy Horschel has gone into the water, and onto his backside, at the Masters.

Horschel had all sorts of fun at the par-5 13th hole at Augusta National on Saturday. He sent his tee shot into the pine straw off the right of the fairway, then played his second shot into a tributary of Rae’s Creek in front of the green.

This left him with two challenges: getting the ball out of the water — and getting to the water.

Horschel removed his golf shoes and socks, rolled up the legs of his white pants to the calves, then proceeded to walk barefoot down the slope toward the water.

He slipped on the grass and fell onto his butt, drawing a good laugh from the patrons — even more so when he turned his backside toward playing partner Phil Mickelson to assess the damage.

Horschel played his third out of the water to well above the hole, put his shoes and socks back on and two-putted for a par that was anything but routine.

With a bit of a grass stain to prove it, too.

It’s moving day at the Masters. The question going into Saturday is which way the traffic flows.

Justin Rose had a one-shot lead over Brian Harman and Will Zalatoris, the last two players to get into the field. Jordan Spieth was two shots behind. In all, 16 players were separated by five shots going into the third round.

The chance of rain is moderate but greater than it has been all week. Of greater interest is whether the forecast holds of gusts upward of 20 mph about the time the leader tees off. If that’s the case, the idea might be to not go backward.

Rose is a former U.S. Open champion and this is the seventh time he has been in front after any round at the Masters, but never when it’s the final round. More telling is that he has gone more than two years without winning anywhere.

The last time someone ended a drought that long by winning the Masters was Zach Johnson in 2007.

Another historical nugget to consider: No one from outside the top 10 through 36 holes has won the Masters since Charl Schwartzel 10 years ago.