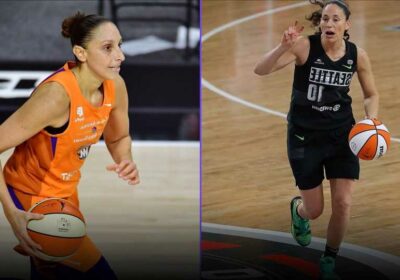 When Sue Bird and Diana Taurasi won their first Olympic gold medals, there were no iPhones, Chipotle had a few more than 300 restaurants spread across the country and Netflix still was sending DVDs of motion pictures through the mail.

Oh, my, here we go: Another story of some extraordinary “AARPthletes.”

Bird and Taurasi were named Monday by USA Basketball to the senior women’s national team that will attempt to earn a seventh consecutive gold medal when the 2021 Olympic Games begin July 23 in Tokyo. This will be fifth Olympics for Bird, who is 40, and for Taurasi, who passed her 39th birthday earlier this month.

In a year filled with them, they represent two more examples of athletes extending their excellence well past what had been considered “retirement age” in the past, joining Super Bowl champion Tom Brady (43), PGA champion Phil Mickelson (50) and Indy 500 winner Helio Castroneves (46), as well as soccer star Carli Lloyd, aiming to make her fourth Olympic team at 39 and sprinter Allyson Felix, who qualified for her fifth Olympics by finishing second in the 400-meter dash Sunday at the U.S. Olympic Trials in Eugene, Ore., and will turn 36 in November.

“It’s just been a tremendous journey – playing for that long, and playing aside pretty much family, my friend. It means everything to us,” Taurasi said during the announcement on the Today show Monday. “I think sometimes you get caught up in the history of where this team has been, and we’re trying to take it to the next generation, the younger players. I think we’re just really focused on what we have to do to come home with gold.”

Taurasi and Bird were teammates for two seasons at Connecticut, and in 2001-02, their squad went 39-0 and capture the NCAA championship.

Given the overwhelming strength of the U.S. women’s basketball program and the value of Bird’s experience, she might have been a worthwhile inclusion just to be available in emergencies and to provide leadership through the tournament process and during practices and games.

That’s not what this is, though. Bird remains among the best point guards in the WNBA, averaging 11.4 points on 52.3 percent shooting and 47.9 percent 3-point accuracy, as well as 6 assists per game, for the team that won the 2020 league championship and is 12-2 and in first place in the Western Conference in the 2021 season.

Taurasi, who can play both backcourt positions, averaged 18.7 points and 4.5 assists last season for the Phoenix Mercury. She has been limited to four games this season because of a chest injury but still has averaged 15.8 points and 3.8 assists.

“I think the most important thing is for the 12 players on the roster to stay healthy,” head coach Dawn Staley said. “There are a lot of players that aren’t on this list that have helped us along the way, This has been a three- to four-year process for us. But you need a great mix.

“When you have the core group of players who have played in multiple Olympic Games, you have to add a mix of youth. And the youth that we’ve added certainly has made it known they want to be a part of the Olympic team, and they put the work in behind it.

“We don’t want to be the team that ends this streak.”