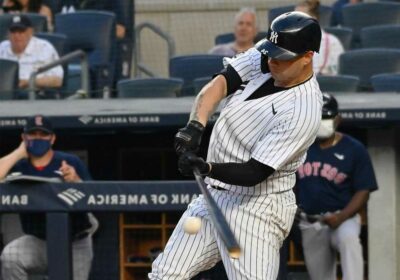 What Yankees can’t do at trade deadline

MINNEAPOLIS — It’s been about six weeks since the Yankees took Gary Sanchez’s starting role away from him.

The move came a month into what was shaping up as a brutal regular season for Sanchez. But in the ensuing weeks, Sanchez has reclaimed his starting role. And while the power and consistency at the plate Sanchez in 2016, ’17 and at times in 2019 haven’t completely returned, Sanchez is now much lower on the list of Yankee concerns.

In 26 games since Aaron Boone called the team’s catching situation “a day-by-day thing” and said Kyle Higashioka had “earned more playing time,” Sanchez has five doubles, four homers and an OPS of .781. He’s also struck out 32 times, but the Yankees will live with that if the production is there.

Sanchez said simplifying his approach at the plate has helped with the turnaround.

Teams have thrown him more fastballs than ever before, thanks to his epic struggles with the pitch a year ago.

Higashioka’s performance at the plate has plummeted. After a two-hit game on April 27, Higashioka is just 6-for-51 with three extra-base hits and an OPS of .426.

The Yankees will get a look at a pair of their former starting pitchers against the Twins, with Michael Pineda set to face off against Jordan Montgomery on Tuesday at Target Field and J.A. Happ going Thursday, with the Yankees yet to announce a starter.

The Twins, expected to contend in the AL Central this season, have been among the biggest flops in the majors and enter the series tied for last in the division with the Tigers.

If Minnesota ends up selling at the deadline, both pitchers could end up getting dealt. Happ has struggled, with his 5.61 ERA the worst of his career.

Pineda has pitched well, despite missing time dealing with an abscess on his thigh. He has a 3.40 ERA and a 1.07 WHIP in nine starts.

Oswald Peraza, considered one of the Yankees’ top five prospects, announced on Instagram Monday he’d been promoted to Double-A Somerset. The shortstop turns 21 this month and was the youngest player in camp with the Yankees this spring.

In 127 plate appearances with High-A Hudson Valley, Peraza has a team-high .917 OPS, and his defense hasn’t disappointed.

In March, Boone said Peraza “looks like a guy who’s gonna be an everyday shortstop in this league.”

Signed as an international free agent out of Venezuela in 2016, Peraza split 2019 between Class-A Staten Island and Class-A Charleston before missing out on last year due to the cancellation of the minor league season because of COVID-19.