It came as the French interior minister blamed ‘thousands of British “supporters” without tickets or with counterfeit tickets’ for the horrific scenes outside the Stade de France.

Kick-off was delayed by 36 minutes as a dangerous situation developed outside the Stade de France in Paris as thousands of Liverpool fans were crushed and teargassed by police.

UEFA initially blamed supporters arriving late at the stadium for the shambolic scenes at entrance gates but later attributed the issues to fans trying to gain access with fake tickets, which caused delays.

And interior minister Gerald Darmanin has also attempted to point the finger of blame at Liverpool fans.

‘Thousands of British “supporters”, without tickets or with counterfeit tickets, forced entry and sometimes assaulted the stewards.

‘Thank you to the very many police forces mobilized this evening in this difficult context.’ 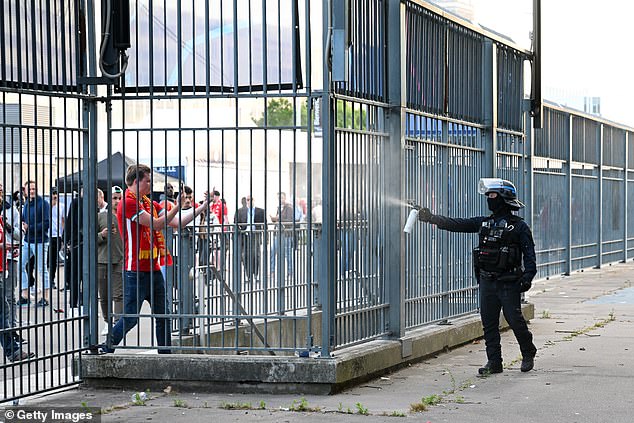 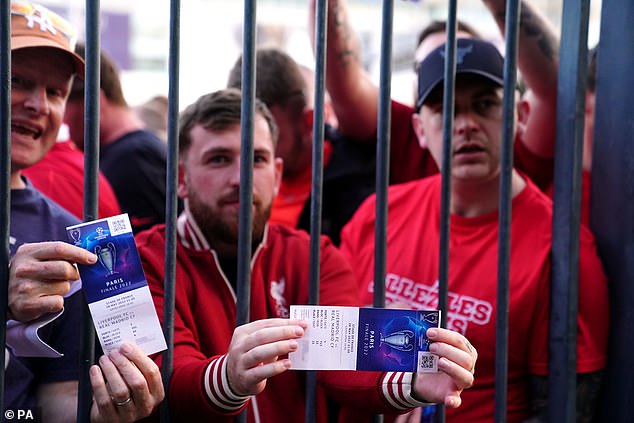 Local police said there had been 68 arrests in the city and around the stadium during the day, with 174 people ‘slightly hurt’ without giving further details. A source said the injuries were mainly from tear gas inhalation.

The Parisian authorities earlier tweeted out a picture of a counterfeit ticket for the final, saying 50 had been seized and one arrest made.

It came as Liverpool demanded a formal inquiry after hundreds of their supporters, including pregnant women and young children, were targeted with tear gas during the chaos ahead of the final.

A club statement from Liverpool FC after the match read: ‘We are hugely disappointed at the stadium entry issues and breakdown of the security perimeter that Liverpool fans faced this evening at Stade de France.

‘This is the greatest match in European football and supporters should not have to experience the scenes we have witnessed tonight. We have officially requested a formal investigation into the causes of these unacceptable issues.’ 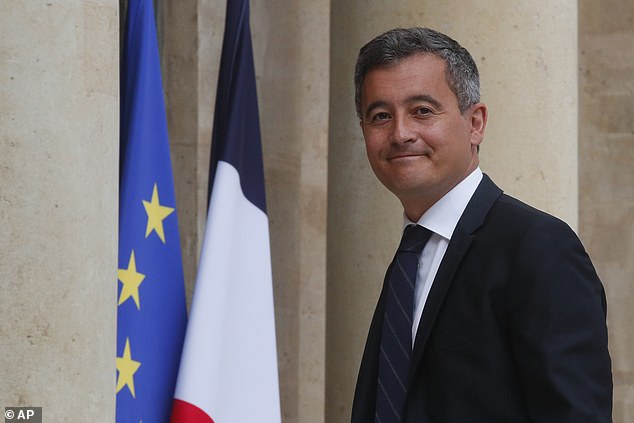 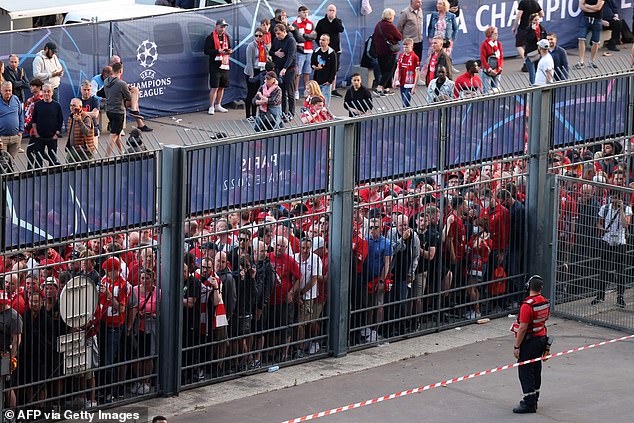 Riot police used batons to push back supporters outside some gates, which had been locked supposedly to prevent those without tickets, or with fake tickets, from getting inside.

UEFA released a statement saying fans with forged tickets in the Liverpool end caused a bottleneck because the ticket barcodes would not scan at the turnstiles.

Elsewhere French riot police were also accused of attacking Liverpool supporters watching their side lose the final from a dedicated fan zone in the Place de la Nation, Paris.

Scores of heavily armed officers were filmed hitting those who had gathered there, with a chilling video showing women among the victims of the police violence, which seemed to be unprovoked.

‘The police came at the fans with batons and shields,’ said an onlooker who witnessed the trouble, which came during the first half. 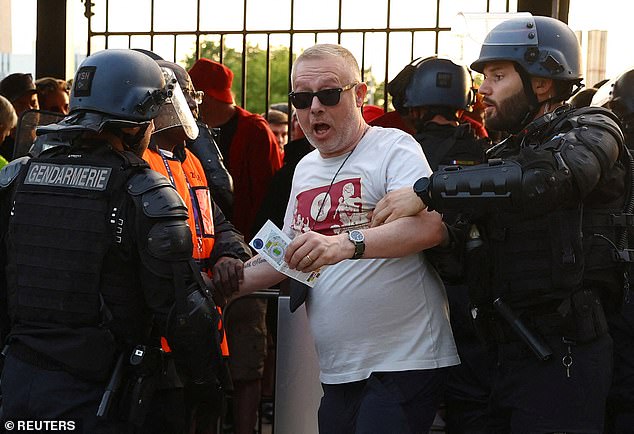 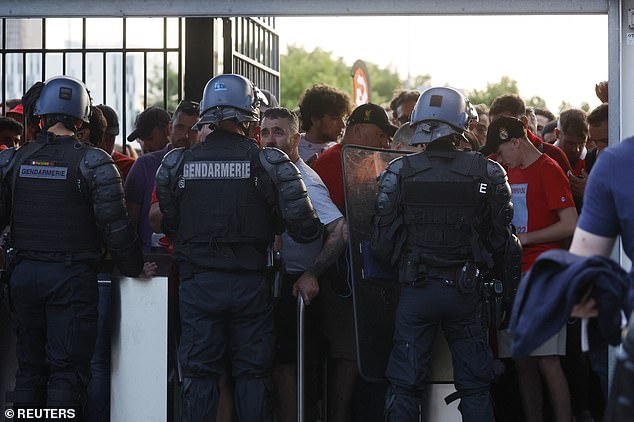 ‘Officers had been standing by with water cannon and other crowd control devices all day, and their numbers increased as the day went on.

A police source said the officers were responding to ‘crown trouble’ among the thousands of Liverpool fans around Place de la Nation.

Footage posted online also appeared to show fans climbing over fences at the Stade de France and rushing up steps leading to seating areas with no attempt to stop them.

Twenty-five minutes before the scheduled kick off Paris police put out a tweet urging fans not to ‘rush the gates’ as they approached the ground. But by then there were already reports of tear gas and pepper spray being used on fans who had been queuing more than two hours to get in. 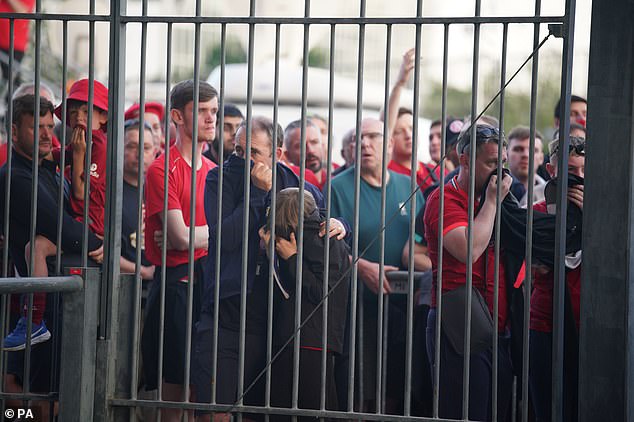 A father covers his face, and his son pulls up his coat over his eyes after Liverpool fans were teargassed by French riot police 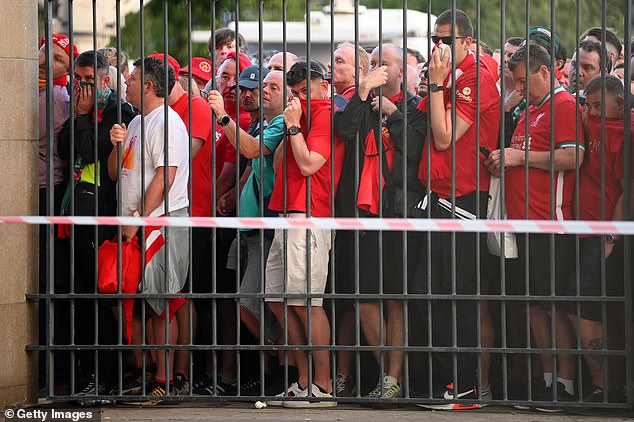 Journalists caught up in the chaos allege they were ‘forced to delete’ incriminating footage of the heavy-handed security response before UEFA officials intervened to calm the situation.

Gary Lineker led the condemnation as he offered a scathing assessment of the security situation at the Stade de France ahead of the delayed UEFA Champions League final.

Speaking to AP while queuing, a fan said: ‘It’s absolutely horrendous. There’s a bottleneck down there and there’s literally a six-foot gap for maybe 20,000 Liverpool fans to get in.

‘We are absolutely being pushed from pillar to post. I have an 82-year-old father in law here. It’s just madness. I’m really sorry but there are just thousands behind us.’