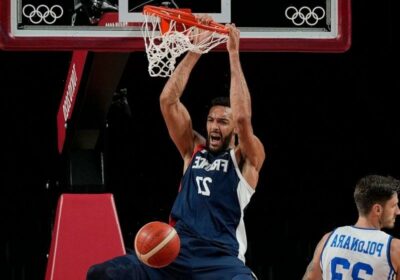 He has won a European title and a pair of Basketball World Cup bronze medals. But even though France had been one of the best teams in the world over the last decade, it kept getting tripped up in the Olympic quarterfinals.

When the French played in that round again Tuesday against Italy, Batum described those past losses as something of a ghost. Another failure would have been unacceptable.

They didn’t. Now they can win the whole thing.

Rudy Gobert scored 22 points, Evan Fournier had 21 on the day he agreed to sign with the New York Knicks and France advanced to the men’s basketball semifinals in the Olympics for the first time since 2000 by beating Italy 84-75.

Thomas Heurtel made the tiebreaking 3-pointer with 2:18 remaining after Italy had erased a 14-point deficit. Gobert had a couple of late buckets to finish it out, including a spinning slam for the final basket.

Batum finished with 15 points and 14 rebounds. The French will play Luka Doncic and Olympic newcomer Slovenia on Thursday in the semifinals.

“I know it’s a game to go to the finals, so for both teams it’s something new,” France coach Vincent Collet said.

Simone Fontecchio scored 23 points and Danilo Gallinari had 21 points and 10 rebounds for their Italians, who won one of the four qualifying tournaments last month to reach their first Olympics since winning the silver medal in 2004.

“I think it was a great summer and of course it’s tough to lose, analyzing the game, but I think that we did a really good job,” Gallinari said. “It was a very good process and a great Olympics for us.”

France was knocked out in the quarterfinals of the last two Olympics and hadn’t been further since reaching the gold-medal game in 2000.

But the French, the 2013 EuroBasket champions, won bronze medals in the 2014 and 2019 Basketball World Cups and maybe this is finally the time for this group to break through on the Olympic stage.

France, which beat the U.S. in their opener, have power inside with Gobert and fellow 7-footer Moustapha Fall, along with plenty of punch on the perimeter.

They used both to break open the game in the third quarter. Gobert scored on a lob and a dunk around a three-point play by Batum in a 9-0 run that made it 56-46.

After a couple free throws by Fontecchio, Fournier and Batum made consecutive 3-pointers to extend the lead to 62-48 with 3:19 to remain in the period.

But Italy opened the fourth with a 12-2 burst, getting the final 10 of them from Fontecchio, to tie it at 66.

“We fell short but not that short,” Italy captain Nicolo Melli said. “Of course it’s better not to go down 14, but we showed one more time we had the character to come back.”

Italy scored the final five points of the first quarter and got the first basket of the second for a 27-20 lead. France came back with a 9-0 run that turned a six-point deficit into a 33-30 lead on Fall’s three-point play with 6:02 remaining in the half.

The teams went back and forth from there until Fournier made the last basket of the half for a 43-42 lead.