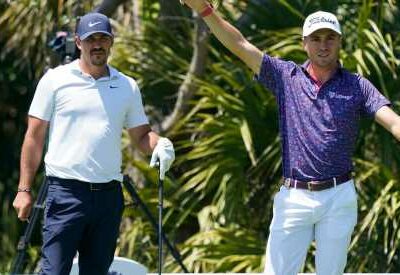 KIAWAH ISLAND, S.C. — This is just the second time in the modern era of men’s professional golf that the sport’s four major championships will be contested in consecutive months, one each from April through July. The schedule was similar in 2019 when, after years of deliberation, the P.G.A. Championship opted to move to May, from its long standing date in mid-August.

But the pandemic in 2020 forced three major championships, the P.G.A. Championship, the United States Open and the Masters, to be held from August to November. So, when this year’s P.G.A. Championship concludes Sunday at the Ocean Course on Kiawah Island, the world’s top men’s golfers will have played five majors in 10 months. Moreover, if the 2021 U.S. Open and this year’s British Open are held as expected in June and July, respectively, golf will have crammed seven majors into 12 months.

If that weren’t enough, many of the best men’s players will also be competing in the Tokyo Olympics golf tournament from July 29 to Aug. 1.

It is unlikely such a grueling schedule would occur again, at least intentionally, but it raises the question of whether golf’s best players can be expected to peak for the sport’s biggest championships repeatedly in a compressed time period. And moving forward, what are the challenges to staying mentally and physically prepared for golf’s new format of four majors in four months? For pro golfers, it is a little like the lengthy playoff runs in professional basketball, hockey, soccer and baseball.

“It feels like every two or three weeks we’re at a venue where it’s super stressful because it’s a difficult golf course or a difficult event,” Kevin Kisner, a three-time winner on the PGA Tour, said.

Kisner added: “It feels like I’m constantly getting beat up out here with the big schedule. The hardest thing is every event feels big. I haven’t played well in any of them.”

It has forced some players to make difficult choices, like skipping regular tour events that they used to play so they can rest for the condensed series of major tournaments. Justin Thomas, the world’s second ranked golfer, made such a decision last month when he took two weeks off after the Masters, even though not playing can diminish a golfer’s competitive edge.

“I’m just not in the physical or mental state to be able to play a golf tournament after the grind of a pressure-filled event like the Masters,” Thomas said. “I need the time to relax and then get into it later where I feel like I’m peaking for this big stretch coming up.”

While the new schedule has added to the strain of trying to claim what can be a career-defining major championship, most players believe it is worth it for two chief reasons: Golf no longer goes head-to-head with the N.F.L. in the fall, and players can take a break and put their clubs away earlier.

Moving the P.G.A. Championship from August to May does both because it allows the PGA Tour’s season-ending FedEx Cup playoffs to start, and end, sooner.

“If you poll all the players, I would think they would be happy about the way it is now,” Jordan Spieth, a three-time major winner, said this week. “We can finish our season in August and not compete with football. And then create a little bit of an off-season for ourselves.”

Playing the P.G.A. Championship in the spring rather than the summer also allows the event to be played in more parts of the United States. Scheduling the tournament in August meant that areas of the country that experience especially hot summer conditions, which are ruinous to greens, could not stage a P.G.A. Championship. That eliminated wide swaths of the country.

“We think the cadence of the schedule is just better for fans — better for players,” said Seth Waugh, the chief executive of the P.G.A. of America, which conducts the P.G.A. Championship. “Obviously it’s exhausting for them to go April, May, June, July, and then if this year you’ve got an Olympics. It’s a long grind.”

The P.G.A. of America represents more than 28,000 teaching and club golf professionals nationwide who serve the recreational golfing public. More golf majors early in the year theoretically enhances overall interest in the sport. Said Waugh: “Our chance to kind of light the fire for the game in May is pretty significant.”

In the end, Adam Scott, the 2013 Masters winner, thinks that tour players will be better adjusted to the new schedule after having done it a second time in 2021. He pointed to Brooks Koepka, who won two U.S. Opens and two P.G.A. Championships in a 26-month span beginning in 2017, as inspiration for his colleagues.

“I look at it as a huge opportunity,” Scott said of the condensed schedule. “And I think seeing what Brooks has done from the schedule of winning a couple in really quick succession, or four in quick time — that’s what is possible if you can get on a roll.”