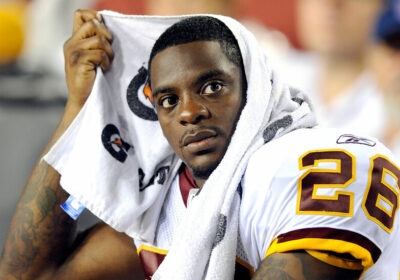 Clinton Portis, the former star running back in Washington and Denver, and two other former N.F.L. pros pleaded guilty for their roles in a wide-ranging effort to defraud a health care benefit program for retired players, the Justice Department announced Tuesday. Portis and Tamarick Vanover pleaded guilty on Friday, while Robert McCune, a ringleader of the scheme, entered his plea on Aug. 24.

In all, 15 people have pleaded guilty to taking part in a plan to defraud the Gene Upshaw N.F.L. Player Health Reimbursement Account Plan, which repays former players for out-of-pocket medical care expenses up to $350,000.

The N.F.L. declined to comment. The N.F.L. Players Association did not immediately respond to a request for comment.

According to court documents, Portis submitted fraudulent claims for nearly $100,000 in medical equipment that was never delivered. Vanover recruited three other former N.F.L. players and helped them file false claims for almost $160,000 total.

McCune, the Justice Department said, orchestrated the fraud, which included submitting about $2.9 million in false claims, for which the plan paid out about $2.5 million between June 2017 and April 2018.

Cigna, the insurance company that administers the plan, detected claims for expensive medical equipment that raised alarms. According to Portis’s plea deal, a claim from January 2018 included Portis and McCune seeking reimbursement of $44,732 for a hyperbaric oxygen chamber. In another, from March 2018, they asked for a reimbursement of $54,532 for a cryotherapy sauna. Portis, the plea deal said, was “aware of a high probability that the claims McCune submitted on his behalf were false and fraudulent and deliberately ignored that fact.”

Portis and Vanover pleaded guilty two days after jurors in their case could not reach a verdict, and a mistrial was ruled on some of the counts against Vanover. A retrial had been scheduled to begin this week.

The two former players will be sentenced in January and each face up to 10 years in prison, but will most likely receive far less, based on sentencing guidelines.

Jeffrey Darling, a lawyer who represents Vanover, said in an interview that his client decided to plead guilty despite the hung jury in the first trial, because jurors had voted 11 to 1 to convict. In a second trial, “we might not have been able to pull it off again,” Darling said.

Darling said Vanover admitted in a settlement that he had provided the personal information of three former N.F.L. players to Reche Caldwell, another former player who worked with McCune to file fake claims. However, “the government was unable to produce any evidence at trial that Mr. Vanover personally facilitated the filing of the claims or that he received any money himself,” Darling said in a written statement.

McCune pleaded guilty at the beginning of the trial to all the charges he faced, including multiple counts of health care fraud, wire fraud and aggravated identity theft. He will be sentenced on Nov. 19 and could face what amounts to a life sentence, if all the charges against him are included.

Five other former N.F.L. players were indicted, including former New Orleans Saints receiver Joe Horn. His son Jaycee, a cornerback, was drafted in the first round in April by the Carolina Panthers.

Horn and 11 other defendants charged in the case pleaded guilty to conspiracy to commit health care fraud. One of them, Caldwell, died in June 2020.

Portis, 40, was by far the best known of the players. Drafted in the second round in 2002 by the Denver Broncos, he was voted Offensive Rookie of the Year. He played 113 games in Denver and Washington and retired in 2010.

McCune, 42, was drafted in 2005 and played eight games at linebacker for Washington and the Baltimore Ravens.

Vanover, 47, was drafted in 1995 by Kansas City. He played 77 games at receiver for Kansas City and the Chargers.

All of the men were originally charged in December 2019.