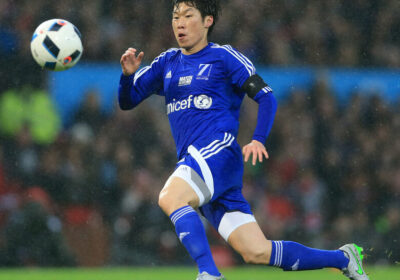 Park Ji-Sung, a fan-favorite former player for Manchester United, asked the soccer club’s fans on Sunday to stop singing a song in his honor that includes the racist stereotype that Koreans eat dog meat.

As a decorated midfielder for the team from 2005 to 2012, Park earned the adoration of the team’s fans, who bestowed upon him a common honor in the soccer world: a song or chant, often performed in the stadium, with lyrics intended to praise him.

But the reference to dog meat was “very uncomfortable to me,” even though he was proud that fans made a song for him and he understood they did not intend to offend or hurt him, he said on an official team podcast released on Sunday.

He thought he had to accept it, he said, having come to Britain from South Korea as a young player who was unfamiliar with the culture. But he heard fans sing the song again in August when Hwang Hee-chan, a South Korean, made his debut for the Wolverhampton Wanderers in a game against Manchester United.

“I should probably speak out more loud this time,” Park said on the podcast. Even if fans didn’t mean any offense, he said, “I have to educate for the fans to stop that word, which is these days usually a racial insult to the Korean people.”

Manchester United said in a statement that it “fully supports Ji-sung’s comments and urges fans to respect his wishes.”

References to dog meat have long been used as an attack on Koreans overseas, a stereotype rooted in the country’s longstanding battle over the ongoing, but diminishing, practice of raising dogs for human consumption. Most Koreans do not eat dog meat now; a September 2020 survey by Nielsen found that 84 percent of Koreans either have never eaten it or do not intend to do so in the future.

The culture has “changed enormously” over the decades and even more rapidly in recent years, said Lola Webber, a director of campaigns to end dog meat consumption for Humane Society International. Most younger Koreans are appalled by the thought, she said, though some older Koreans still seek out the meat at specialized restaurants.

“It is not part of mainstream culture by any means in South Korea,” she said. “It hasn’t been for a very long time, but especially in the last few years, there’s been a very vocal opposition.”

The world’s top soccer clubs have consistently wrestled with racist behavior by some of their fans. In 2017, Romelu Lukaku, who is Black, asked Manchester United fans to stop singing a song for him that contained a racial stereotype. Some fans refused, following the song with a new one: “We’re Man United, we’ll sing what we want.”