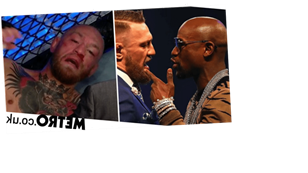 McGregor’s hopes of luring arch nemesis Khabib Nurmagomedov into a rematch were left in tatters after he was stopped by Poirier in a seismic upset at Fight Island in Abu Dhabi.

The Irishman had beaten Poirier inside two minutes in September 2014 and was overwhelming favourite to see off his lightweight rival again in a bid to get fierce adversary Nurmagomedov to reverse his retirement decision.

But the American managed to gain revenge, surviving one or two nervy moments in the first round and then gaining the upper hand in the second round with some savage kicks to McGregor’s lead leg.

Poirier forced McGregor back with a flurry of punches, flooring him with a short right hook before a couple of blows to his defenceless opponent led to the end of the fight after two minutes and 32 seconds of the second round.

This was McGregor’s first fight in a year when he stopped Donald Cerrone in 40 seconds. Before that he had not stepped inside the octagon since October 2018 when he lost to Nurmagomedov.

Several of his UFC rivals were quick to take delight in his downfall, as was unbeaten former boxing pound-for-pound king Mayweather. The legends of their respective sports clashed back in 2017, when the American easily extended his unbeaten professional record to 50-0.

The pair have never seen eye-to-eye and with McGregor accused of racism after inviting Mayweather to ‘dance for him’ during one barb-laden pre-fight press conference.

Responding to a post on social media shortly after McGregor’s defeat to Poirier, which questioned why both men were perceived differently by the sporting public, despite sharing some questionable and controversial personality traits, Mayweather wrote: ‘I seen this post and my take on it is that the world knows Con Artist McLoser can steal everything from me and be loved but I’m hated.

‘That just let you all know that racism still exist. Just know, that bum will never be me or be on my level. I’m just built different, my mindset is on another planet, my skills are second to none, I’m a natural born winner and yes I talk a lot of trash, but every time I back it up.

‘This is what they hate. It’s sad that you can be a poor black kid from the ghetto that has dealt with racism your whole life and work extremely hard to put yourself and your family in a better position, and most of the hate come from my own people.

‘Connor cannot even win in his own sport, but talking about coming back to boxing to fight Pacquiao. Nobody wants to see that, it’s like my leftovers eating leftovers.’