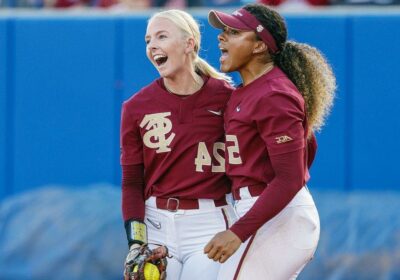 OKLAHOMA CITY — Florida State freshmen Kalei Harding and Kaley Mudge have the Seminoles knocking on the door of a national title.

Harding homered and drove in four runs and Mudge had three hits, leading Florida State past No. 1 seed Oklahoma 8-4 in the opener of the Women’s College World Series championship on Tuesday night.

Mudge, who had 16 hits all season before the World Series, increased her WCWS total to a record-tying 13.

Sydney Sherrill added a two-run single during a five-run fourth inning for the 10th-seeded Seminoles (49-11-1), who need a victory on Wednesday or Thursday in the best-of-three series to win their second NCAA title in four years.

They’ll again have to play what amounts to a road game, 25 miles from Oklahoma’s campus.

“It’s going to take all of us and all of our fight,” Mudge said. “Oklahoma is a great team, and we know they have some hot bats and some good pitchers. Just focusing on us, focusing on what matters. And what matters is the people in our circle.”

Harding finished 3-for-4 and scored twice while batting ninth.

“Kalei has been amazing all season,” Florida State coach Lonni Alameda said. “She’s had a big role for us as a freshman. She’s played a lot of different positions. She’s been at the top of the lineup for most of the season and has done incredible.”

Seminoles ace Kathryn Sandercock got the final four outs for the save, stopping a rally by Oklahoma, which scored two runs in the fourth inning and two more in the sixth after falling behind 7-0.

Seminoles starter Danielle Watson allowed four runs in 5 2/3 innings to get the win.

Kinzie Hansen and Nicole Mendes homered on consecutive pitches and Mackenzie Donihoo had a two-run single for the Sooners (54-4).

Harding opened the scoring with a two-run homer in the third inning off Oklahoma starter Nicole May, who allowed seven runs in 3 2/3 innings.

Harding’s two-run double in the fourth made it 4-0, and Sherrill — from nearby Moore, Oklahoma — drove in two more in the five-run inning.

Sherrill also threw out Oklahoma’s Tiare Jennings at the plate in the bottom of the seventh to preserve the Seminoles’ four-run advantage.

“I made a horrific call,” Gasso said. “And I own that. I should not have sent Tiare. I just really in my mind was wanting to push the envelope to create momentum. … I wear that. I already apologized to the team. And that was a bad call by me.”

The Seminoles got an unusual insurance run in the seventh. Josie Muffley was held up late at third on Harding’s single, and Anna Shelnutt was thrown out while scrambling back to second. Muffley broke for the plate and was tagged out, but an obstruction call against catcher Hansen gave Florida State the run.

“It hurt us,” Gasso said. “That call hurt us. And all I can say is that I wish that rule was looked at a little bit differently because there’s a lot of ways that you can look at it. And I guess I’ll just leave it right there at that.”

Muffley stayed down briefly after the collision at the plate before getting up and leaving the field. She was replaced in the bottom of the inning.

The Seminoles expect her back in the lineup Wednesday.

“Josie is definitely the toughest player I’ve ever played with,” Harding said. “She’ll take whatever. She’ll take so many hits, so many hit-by-pitches, so many collisions. But she’ll get right back up. And I’m pretty sure you’ll see her out on the field tomorrow with a huge smile on her face.”

Gasso expects Oklahoma to bounce back. Each time the Sooners have lost this season, they have recovered to beat that team the next time they played.

“I don’t need to tell them,” she said. “They know. They know exactly how this works. And I mean you’ve got to put it all out there. And I think we learned from the way we played tonight. And I’m very confident as I know they are that they will not repeat that performance and have a different mentality of fight, even when things aren’t going our way.”