Home » Sport » Fearful predictions for a year where pigs might fly

Fearful predictions for a year where pigs might fly Here are some fearful predictions for sport in 2019, the Chinese year of the pig: 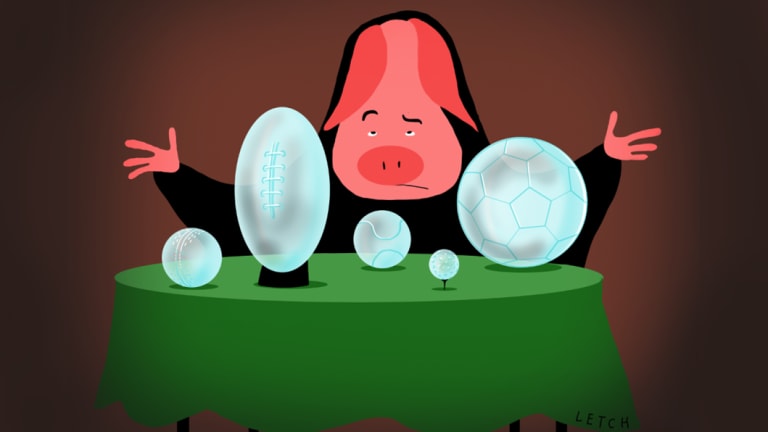 Or, as we know it, the year of the groundhog. The Roosters and Storm contest their second straight grand final. Both clubs are the top two all year, after most of their main rivals implode during or soon after the off-season. Both Melbourne and Sydney lose a handful of unremembered games during the Origin period to produce the illusion that the competition is even. The NRL declares this ‘our most even season ever’. New South Wales win Origin for the second straight year, prompting Queensland to threaten to discontinue the ‘tired concept’ unless it is allowed to extend its border south of Taree. And build a wall. And make New South Wales pay for it. Various bad things happen off the field. Nobody likes The Bunker. One club near the bottom of the table (ie not the Roosters, Brisbane or Melbourne) is penalised for salary cap infringements. Todd Greenberg ages 10 years. Cameron Smith, who appears to have stolen the 10 years Greenberg lost, signs a new contract with the Storm and sets his sights on 500 NRL games.

The Wallabies stun the world by reaching the semi-finals of the Rugby World Cup, thanks to a last-minute line-out throw by Tatafu Polota-Nau in the quarterfinal against Japan hitting Michael Hooper in the head, rebounding off the goalposts and landing in Kurtley Beale’s arms for the winning try. Israel Folau comes out. David Pocock chains himself to a goalpost in protest at Japan’s whaling practices. With both players therefore unavailable for the semi-final the Wallabies are towelled up by ultimate winners England.

The Sydney Swans squeak into the top eight thanks to Lance Franklin’s year of 100 goals and the Coleman Medal, club best and fairest after topping the counts of possessions, tackles, handballs and mouthguard-into-socks insertions, and winning the Brownlow. All on 20 minutes of training for the entire year. But, due to the Swans’ seventh-place finish, expert commentators declare the Swans’ recruitment of Franklin a failure. The GWS Giants, meanwhile, make their first grand final only to be swamped by the rampant Richmond Tigers.

Sydney FC finish top of the A-League table again, and Melbourne Victory again beat them in the grand final. Expansion clubs declare expansion a failure. Club bosses rebel against too much club representation on FFA board. A lot of other inexplicable political stuff. Graham Arnold wins ABC Sports Personality of the Year.

Australia’s Adam Scott wins his second major tournament, the British Open at Royal Portrush. Scott overcomes his putting woes by adopting a cross-handed broomstick grip while keeping his eyes closed and vaping an apple-spiced tobacco hookah. In the final analysis, this unorthodox technique is not what cures his putting. He starts the final round 15 shots behind the leaders, gives up hope, contemplates retirement to run a surf camp in the Maldives, and after mentally clocking off from golf he rolls in eagles and birdies all through the final morning of the Open. Later in the afternoon, the leaders are wiped out by a Northern Irish monsoon, and ‘doing a Bradbury’ is replaced in the lexicon by "doing a Scotty". Tiger Woods, who comes second in this and the other three majors, confesses, "Sometimes I feel I’ve done something to deserve this".

"Mother Serena" Williams wins all four grand slams. Her winning speech after the US Open at Flushing Meadow is disrupted by a cry of "Shut the f— up, Mom’, which turns out to be Williams’s one-year-old wonder child Olympia uttering her first fully-formed sentence. It is directed at Olympia’s nanny. Novak Djokovic wins the first three men’s grand slams, perfecting his long-term project of impersonating a sportsmanlike human being. He loses in the final at Flushing Meadow, breaking three rackets and an umpire’s chair, and his project hits a setback.

Anthony Mundine makes a comeback. So does Aussie Joe Bugner. In the same bout.

Winx finishes her career by literally lapping the field in the Queen Elizabeth Stakes. In an effort to understand Winx’s unique competitive intelligence, equine brain scientists manage to decode her thoughts before, during and after the race, which come out as "Mm, hay", "Quit whipping me, shortarse", and "Mm, more hay". The Melbourne Cup is won by a horse no Australians have ever heard of, from a field consisting of 23 others no Australians have ever heard of.

The top 10 finishers in the men’s world title race are all Brazilian, after the leading Australian and American competitors quit surfing in order to go surfing. The women’s title is even spicier, with Australia’s Sally Fitzgibbons allegedly biting off the leg of longtime rival Carissa Moore. After investigation by a guy sitting on the beach, a shark is held responsible. Stephanie Gilmore cruises by to win her record eighth world title.

David Warner is top scorer for Australia in both the World Cup and the Ashes. However, with a team comprising seven all-rounders and four wicketkeepers, England win both trophies, then pool together to buy the winning ticket in the National Lottery, invest their winnings in shorting the pound, invest their winnings from that in buying their own Formula One team, and invest their winnings from Lewis Hamilton’s sixth world championship in bribing a judge to free Ben Stokes after he mars the Ashes victory celebrations by punching out Warner in an alley behind Sheffield’s number one nightclub. Stokes walks free. Nobody minds. Later in the year, women achieve equal pay in Australian cricket after television ratings, attendances and sponsorships for the WBBL and women’s internationals move past the men’s. Or put another way, after the revenue raised by the men’s game moves past the women’s.

Happy year of the pig.