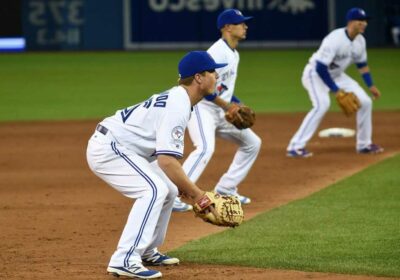 MLB whiffing and becoming a waste of time

Imagine the big league team that breaks spring training to demonstrably declare: “You may beat us, now and then, but never at the Game of Baseball!

“Hi, Sparky Fungobatz here, to talk a little baseball with ya.

“You wanna play the shift against us? Knock yourselves out. We have been drilled to beat the shift with ‘other way’ swings for RBI doubles and singles into inviting, conspicuously empty spaces. And we know how to bunt, another way to earn an important base hit rather than another defeated walk back to the dugout.

“We’re the team that understands that the shift can place an opponent’s defense in peril, not just our offense. So go ahead, show us your shift.

“Pitching? Don’t wait for us to cull our bullpen in search of the one guy you can clobber. If we’ve got a guy out there who’s making life tough on you, starters included, we’re gonna stick with him. Crazy as that sounds!

“Hustle? We will not be out-hustled. If a guy jogs when he should be running, if he home-plate-poses a double or triple into a single, he will immediately be pulled. We don’t care if he’s embarrassed or angry; he brought that on himself. We don’t run a day camp, our guys are paid — and many paid extraordinary amounts — to play winning baseball.

“The guilty can’t defend the indefensible, and our manager will not indulge their feelings to excuse them. He wasn’t hired to be their human resources pal, to suffer their minimal or zero efforts. He was hired to win games and give our fans and our franchise their money’s worth.

“The quickest way to home plate is to run there. And that applies to all of our players. How many games per year are decided by hustle or the absence of it? Six, eight, 10? We’re gonna win all of them!

“And our first-base coaches will not be allowed to glad-hand one of our guys in the process of hitting a home run. He should be well past first base, running on contact. We’re going to use our spikes as intended.

“Our designated hitter, especially with two strikes, will be tasked with putting the ball in play, not striking out trying to hit the ball 500 feet.

“And no bat-flipping or any similar acts of ‘me.’ We’re a team: we’ll win with class, lose with class. You hit a double? Prepare for the next pitch and the next batter, check the defense. No ‘check-me-out’ signaling to the dugout.

“Keep your head in the game, not your face in the mirror. Save all celebrations for the final out — after we win.

“Let other teams dislike us only because we beat them, not because we’re obnoxious. Such conduct will not cost us a single fan or customer, quite the contrary. We’re not interested in pandering to fools by acting like fools.

“Social media? Keep it clean, keep it civil, or keep off.

“On defense, if you want to catch flies with one hand, increasing your chances to drop the ball, go ahead. But the first time you drop one — allow an opponent to reach base for no good reason — you’re coming out.

“We will allow nothing short of smart play to reflect on our team and its manager. Before road games, we’re even going to throw balls against the outfield walls to gauge what to expect.

“So shift away! Within a month no one will again dare. There’s a price to pay in left field as much as in right!

“So baseball fans, this is Sparky Fungobatz, signing off until next time, when we discuss the best way to sit out a three-hour rain delay.”

Of course, the preferred, proven managers to enact such a sensible, winning, no-compromise plan — the kind who instructed folks such as Aaron Boone when he played, for example — are mostly dead.

In what might be a reflection of where Rob Manfred and the commissioner’s office feels MLB should be headed, Brian Stedman, 44, has been hired as MLB’s executive vice president of strategy and development.

Stedman spent the past seven years serving in the same capacity for Vince McMahon’s WWE.

Interestingly, former McMahon executives once assiduously avoided listing him and the WWE, and before that the WWF, on their employment bios. The embarrassment was too great.

Playing with fire, continued: Looks as if 20 will again go in the Kentucky Derby — a frightening total of inexperienced, mostly unreliable and often flighty 3-year-olds to send into a gated land rush in service to owners’ egos and expensive entry fees.

No horse race, even with seasoned entries, should logically include more than a dozen, 14 at most. They’re young animals. And jockeys are not crash-test dummies.

Real college students, when attempting to transfer, run into serious academic credit transfer issues. Apparently, with scores of college basketball players in the transfer process, this significant issue is not an issue.

Playing it straight and simple, Aaron Rodgers was a solid guest host of “Jeopardy!”

The swipe I took at YES’s truck for negligence in failing to show the Rays’ Austin Meadows at the close of a half-inning after he’d been hit by a pitch, was unfair. YES was mostly working off a Bally Sports Sun feed.

Cleveland vs. White Sox on Thursday: Batters struck out 14 times against four pitchers. Not one batter in the Tribe lineup was hitting over .250. Eleven batters in the 22-strikeout game were not hitting above .185. Elsewhere, Orioles DH Anthony Santander struck out three times in three ABs — in one of those new-age-compromised seven-inning games.

Everyone deserves multiple second chances — provided they can play ball. Often arrested and suspended defensive end Aldon Smith, the latest in a series of Adam “Pacman” Jones-types to be indulged by the NFL, has signed with the Seahawks. Meanwhile, a league that pretends to be concerned with brain injuries, has added a regular season game to total 17.