Home » Sport » Essendon’s 150th anniversary was full of nostalgia. It showed how far my club has fallen

Essendon’s 150th anniversary was full of nostalgia. It showed how far my club has fallen 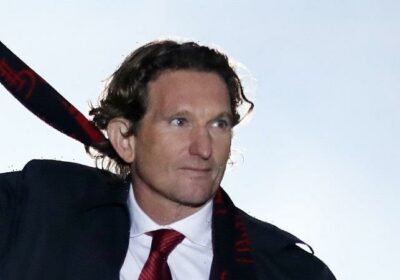 Watching Essendon’s nostalgic 150th-anniversary celebrations before the match against Carlton on Friday night, it wasn’t hard to see how far a once-powerful club has fallen.

All the big names from the glory days of the 1980s and 1990s were there: Long, Wanganeen, Hird, Lloyd, Sheedy. The Bomber dynasties spanning generations were greeted with generous applause: the Fletchers, the Danihers, the Watsons.

The hype work by MC Briggs was excellent, but even he couldn’t get past the point that almost all of them were his childhood heroes. They were mine too.

For the younger fans, there was hardly anyone on the field they would have seen live. The only millennial Bomber present was Jobe Watson, introduced alongside his three-time premiership-winning dad, Tim.

It all felt slightly absurd as Carlton kicked the first goal of the game in the opening minutes. Despite some brief resistance, the Bombers staggered along to another uninspiring loss. A ladder position of 16th flatters a team bereft of confidence, flair and grit.

I’m thinking of the under-30 supporters following a team that has given them no success as I attempt to bring another Bomber into the fold. 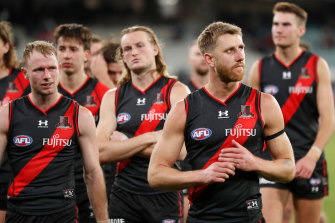 It was another uninspiring loss for a team bereft of confidence, flair and grit.Credit:Getty

The indoctrination of my three-month-old son has begun by dressing him in a size 00 Essendon onesie. It’s a huge amount of power to give parents and I hope he doesn’t blame me for it when he gets older.

Clubs rely on their fans doing this. Melbourne has nine football teams, with evaporating connections to the suburbs that they came from. Genes tend to play the most important role in maintaining a supporter base.

Unlike my son, I was able to choose my own team. My dad arrived in Melbourne from New Zealand during Richmond’s great era of dominance of the late 1970s, finding new friends in the MCG’s Punt Road End.

Perhaps as a Kiwi, he didn’t see the need to push me to the yellow and black (this felt like a bullet dodged, until recently). My mum wasn’t fussed, while my grandfather, who played for South Melbourne’s reserves, tried to tempt me to the Swans. I found the Bombers on my own. 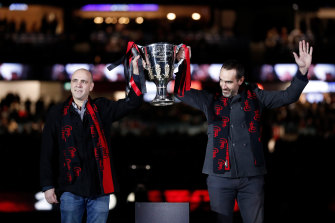 This is now a historically bad period for Essendon – worse than the previous barren eras of the 1930s and 1970s. As opposition fans love to remind us, there hasn’t been a finals win in more than 6400 days.

It’s not as if success has just been out of reach either. The Bombers haven’t finished above seventh on the ladder since 2004. Every finals appearance has been followed by a finish outside the top eight in the following season.

Other clubs have longer premiership droughts but they’ve at least got close to ending them. Essendon is one of only four clubs not to reach a preliminary final since 2015, the others being St Kilda, the Gold Coast and Carlton. 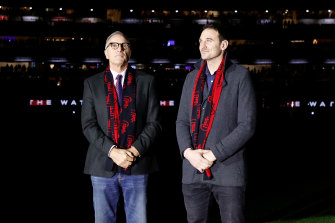 Jobe Watson (right) was the only millennial Bomber celebrated, introduced alongside his three-time premiership-winning dad, Tim.Credit:Getty

St Kilda last did it in 2010, when they were one point off a drought-breaking premiership. The Suns, founded in 2011, haven’t made the eight in their history but finally look on the right track.

Carlton, as Friday night showed, is like Andy Dufresne in The Shawshank Redemption – ready to escape purgatory, while Essendon waits like Red to be released on parole.

Essendon should be going through a soul-searching process to figure out what has gone wrong.

Every supporter has a theory: the move from the Windy Hill spiritual home to Tullamarine took away the club’s soul; poor development and drafting has left the club without a competitive list; business has come at the expense of football performance; the drug saga can only be exorcised when everyone from that period is gone.

All of this is beyond the understanding of my baby Bomber, who is currently much more interested in discovering his own hands than why Essendon gives up so many coast-to-coast goals.

If anything is going to shake things up at Essendon, you would hope that the contrast of celebrating the glory days in the club’s darkest hour would do it.

Keep up to date with the best AFL coverage in the country. Sign up for the Real Footy newsletter.