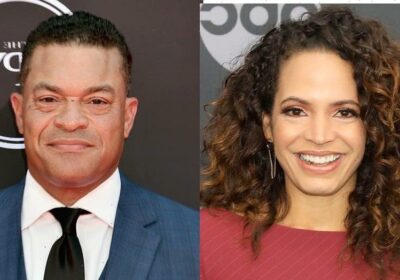 Elle Duncan and Michael Eaves are on the short list of names ESPN is considering to host NBA Countdown this season after the departure of Maria Taylor, multiple sources tell OutKick.

ESPN airs NBA games on Wednesdays, Fridays, Saturdays, and Sundays, so Eaves and Duncan could even split days as hosts. Stephen A. Smith has also hosted one night of NBA pregame coverage per week since 2019.

Aside from the loss of Taylor, NBA Countdown will undergo another change this season. ESPN has named Dave Roberts the head of NBA production, and sources tell OutKick that Roberts is pushing for Duncan to host the program. Roberts oversees the 6 pm SportsCenter that Duncan hosts. (For more information on Dave Roberts, read this.)

Duncan and Eaves are not surprising candidates, but they both come with baggage that ESPN doesn’t need. Should ESPN settle on Duncan or Eaves, the network would just be replacing one toxic host, Maria Taylor, with another. Eaves and Duncan worked together to freeze Sage Steele out of a social justice special one year ago, claiming Steele “wouldn’t be accepted by what they considered the black community.” Agree with their politics or stay away, they say. They are bad teammates.

If ESPN goes in a different direction on Countdown, which sources say is still possible, the network has in-house candidates who are not divisive behind the scenes. Cassidy Hubbarth, for example, is well-liked by her colleagues and has the basketball-first focus ESPN needs. Hubbarth also covers the NBA, unlike Duncan and Eaves.

If ESPN isn’t worried about a host’s NBA ties, the network should consider Scott Van Pelt. Van Pelt and Mike Greenberg are ESPN’s best studio hosts. Greenberg was an upgrade on the NFL Draft in April, and Van Pelt would be an upgrade on Countdown. And while Van Pelt likely cannot host each day since he also hosts the midnight edition of SportsCenter, he could host one day a week and then helm the NBA Finals on ABC.

As for Malika Andrews, she probably won’t be in consideration for the Countdowngig. ESPN views Malika Andrews as the frontrunner to host an upcoming daily NBA show that will replace The Jump, formerly hosted by Rachel Nichols. Nichols is on her way out of ESPN following this summer’s debacle with Maria Taylor.

Maria Taylor made a mess of ESPN’s NBA programming, but it appears ESPN hasn’t learned anything from the events of this summer either. I’d consider Hubbarth and Van Pelt over Duncan and Eaves. However, ESPN is interested in the latter two.