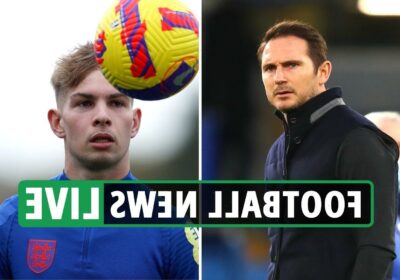 ENGLAND are back in action tonight as they take on Albania in their 2022 World Cup qualifier.

Arsenal's Emile Smith Rowe has a chance of starting for Gareth Southgate's side after a late call-up to the squad.

Frank Lampard is a candidate to become Norwich manager nearly a year after leaving Stamford Bridge, according to reports.

The Chelsea hero will replace Daniel Farke, who was dismissed last weekend.

Elsewhere, Steven Gerrard has been confirmed as Aston Villa's new manager after the departure of Dean Smith.

The ex-Rangers boss has signed a two-and-a-half year deal with the Villans.

We've also got all the latest on a potential transfer for Declan Rice as well as updates from Chelsea, who are eyeing a swoop for Attila Szalai in January.

Newcastle are looking to get rid of the Sports Direct branding from their stadium as the Magpies get set for Eddie Howe's first game in charge next weekend.