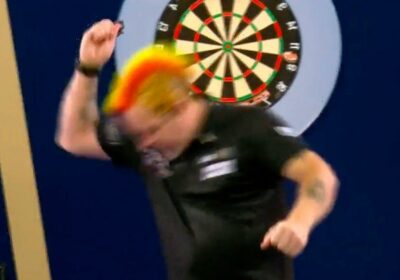 Peter Wright flung his darts to the floor in an explosion of relief after surviving a tie-break thriller to break Geordie kid Callan Rydz's heart.

'Snakebite' Wright clawed his way back from 3-1 down to pip Rydz 5-4 in the William Hill PDC World Championship and book an all-Scottish semi-final against Gary Anderson on Sunday.

Rydz, who gave up riding his BMX bike to concentrate on darts after breaking three bones in a crash during lockdown, was distraught after his bid to wreck 51-year-old Wright's bid for a second title fell just short.

But Wright's coolness when a section of fancy-dress dullards tried to distract him with ill-mannered boos on game shots was exemplary.

He said: “I don't normally react like that, but I was annoyed with myself for missing so many doubles. I should have won it ages earlier than I did.

“I think a combination of experience, the crowd and a few evil looks from my wife Jo got me through in the end.

“Gary is a fairly handy player to be meeting in the semi-finals – if I can go on to achieve half as much as him in my darts career, I'll be pretty happy.”

Rydz, fortified by one of his BMX brethren – Olympic champion Tom Pidcock – being awarded an MBE in the New Year Honours, announced himself by taking out 156 to claim the opening leg.

Who will win this year's PDC World Darts Championship? Let us know in the comments section below.

And when the world No.36 stormed into a two-set lead, including four ton-plus checkouts, Wright looked so shocked it was almost enough for his mohawk barnet to develop a side parting.

But like his spiky hairdo, dear old Snakebite doesn't lie down easily, and the 2020 world champion fought valiantly to repair the early damage.

He might have been surprised to learn three Leicester City footballers – James Maddison, Harvey Barnes and Hamza Choudhury – were in the posh seats at Ally Pally.

Leicester's match with Norwich was postponed because of rising Covid cases among Premier League squads.

A night out at the darts, where six players have tested positive since the start of the tournament, was an interesting choice of low profile.

They were, however, treated to an enthralling contest in which Wright missed double 12 for a perfect nine-dart leg in the sixth set.

When Rydz, 23, missed a shot to make it 4-2 and Wright accepted the chance to draw level at 3-3, the Bedlington terrier could have buckled – but the tide had turned.

Once Wright gave up window-shopping around the outer ring and took it to a decider, he always looked likelier to breast the tape.