Home » Sport » Eliud Kipchoge Emerges as the Philosopher-King of Running

Eliud Kipchoge Emerges as the Philosopher-King of Running KAPTAGAT, Kenya — One afternoon in January, three months after he became the first man to run a marathon in under two hours, Eliud Kipchoge sat on a bench inside his Rift Valley training camp, reflecting on how it felt to be a newly minted sporting icon.

Kipchoge wasn’t new to the spotlight: he’d captured his first world title, on the track, back in 2003, won 11 of the 12 marathons he’d entered, and held the marathon world record since September 2018. But his one hour 59 minutes. and 40 seconds in Vienna last Oct. 12 had brought a heightened level of acclaim and celebrity. In Kenya his image was everywhere: on billboards, nightly newscasts, and life-size cardboard cutouts. The hashtag “No human is limited” had gone viral.

It appeared not to matter that the run — effectively a glorified time trial, aided by a rotating cast of pacemakers — didn’t count as an official world record. Eclipsing the two-hour barrier spoke to something higher — in part because the milestone was so mythical, and in part because Kipchoge’s own wise words had made it transcend sports.

“The reason for running 1:59 is not the performance,” Kipchoge said. “The reason to run 1:59 is to tell that farmer that he is not limited; that teacher that she can produce good results in school; that engineer… that he can go to another project.” 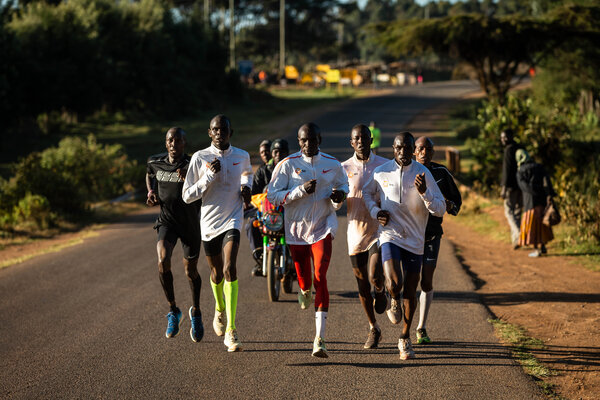 Kipchoge, who will race for the first time since his Vienna triumph at the London Marathon on Sunday, has emerged as one of the most rarefied figures in sports. The London race will be an elite-only affair and will be run on a circuit around St. James Park. It will also be a showdown between Kipchoge and Kenenisa Bekele, of Ethiopia, who last year missed breaking Kipchoge’s official marathon record of 2:01:39 by just two seconds.

Kipchoge though is not only the fastest, most consistent marathoner in history. He’s also running’s philosopher-in-chief — a DRI-FIT wearing Yoda who has redefined human limits and thinks hard about the meaning of his quest.

But what is it, exactly, that compels Kipchoge to speak in proverbs and has enabled him to stay at the top of the running world for 17 years and counting? What gives him such force?

Part of the answer may lie in his background as a Talai: a small clan of the Nandi tribe known for their wisdom, their important role in Kenyan history, and — according to some — their supernatural abilities.

“The Talai were the clan that produced our leaders,” said Stephen Sang, the Governor of Nandi County, where Kipchoge grew up and nearly a million Nandi call home. “They were the prophets — the people who could see the future.”

Like most of Kenya’s elite athletes, Kipchoge is a Kalenjin — an umbrella term used to describe a group of nine closely related tribes, including the Nandi, that inhabit the high-altitude Rift Valley region. The Talai, in turn, are a small subset of the Nandi — an extended family that traces its roots back to a powerful orkoiyot, or ritual expert, who came to prominence in the mid-19th century.

The orkoiyot functioned as a community sage, overseeing the planting of crops, summoning the rains and sanctioning military expeditions and coming-of-age rituals. Today, the Talai no longer disclose the identity of their leaders. But politicians still travel from all over the country in search of the community’s blessings. According to Thomas Maritim, a Talai elder who once taught Kipchoge in primary school, all male Talai are believed to have been born with some spiritual abilities, though only a select few are true prophets.

“It’s not something you can learn,” he said. “It’s a gift from God and you cannot avoid it.”

Still, the Talai have long been marginalized — in part because of their prominent role in Kenya’s early anticolonial struggle. In 1890, according to legend, an orkoiyot named Kimnyole had a vision that white men would arrive to conquer Nandi lands, accompanied by a serpent belching smoke and fire. When Kenya’s British colonizers built a railway from the coast, the Nandi were suspicious: they sabotaged its tracks, threatened encampments and raided wires from an accompanying telegraph line — provoking the wrath of the Empire.

In a 1905 offensive, colonial troops fanned out across the Nandi hills, burning huts, seizing cattle and killing more than 1,000 people — including Kimnyole’s successor, Koitalel arap Samoei, who’s feted today as a Kenyan independence hero. The British forced the surviving Nandi into a “reserve,” seizing fertile lands that would later become lucrative tea farms. They also introduced Christianity, whose converts came to view the Talai with suspicion. In November 1919, wary of their ability to foment resistance, colonial authorities rounded up 130 Talai families and dumped them on an isolated patch of land between two rivers. Kapsisiywa, Kipchoge’s hometown, got its start as a mosquito-ridden camp of exiles.

It is there that the story of the first sub-two-hour marathon truly begins — not with Kipchoge, but with his longtime coach and mentor Patrick Sang, a fellow Talai and Kapsisiywa native. Sang was one of the first people to make a name for himself in the village, which is home today to roughly 3,000 people who grow tea and maize and keep small herds of livestock.

Discovered by a scout from the University of Texas, he landed a running scholarship and eventually won a silver medal in the 3,000-meter steeplechase at the 1992 Olympics in Spain. As a child, Kipchoge would gather with friends around a black-and-white TV to watch Sang compete. By 2002, Sang had transitioned to coaching; Kipchoge, who was scraping out a living delivering milk on the back of a bicycle, decided to seek him out for running advice.

Ever since, Sang has been the architect and Kipchoge the contractor who follows his designs: the grueling early-morning track workouts; the long runs at the edge of the Rift Valley escarpment; the six days a week in a Spartan camp away from his wife and children. (The camp, part of the Dutch athletics management group Global Sports Communication, closed in March because of the coronavirus pandemic, though Kipchoge and his teammates have continued to train in groups under Sang’s guidance.)

Kipchoge was among the world’s best on the track for a decade before finding his true calling in the marathon. In 2016, he won the Olympic marathon in Brazil. The following year, he just missed breaking the two-hour barrier at a special event organized by Nike at a Formula 1 racetrack in Italy.

After back-to-back victories at the London Marathon and his 2:01:39 official world record in Berlin, Kipchoge accepted an offer from Jim Ratcliffe, the billionaire chairman of the British chemical firm Ineos, to take another stab at what some called running’s last great barrier. The image of him, in white shoes and singlet, floating through Vienna’s streets en route to his 1:59:40, is now etched in the sport’s pantheon.

Kipchoge has the requisite raw physical talent for racing, but the qualities that set him above the rest, Sang and several teammates said in interviews, involve his unmatched combination of discipline, self-belief, and psychological mettle. Sang spoke of Kipchoge’s ability to “focus a notch higher” — during training, at key moments in races, and in avoiding the distractions brought by fame and wealth.

Many of Kenya’s stars have veered off track because of alcohol or bad investments. Kipchoge shuns nightlife for the quiet of the camp, where he pitches in with daily chores and spends his free time reading books.

“He’s just a hardworking guy, a simple guy, who believes in himself so much,” said Geoffrey Kamworor, a training partner who won the 2019 New York City Marathon and set the half-marathon world record last September.

“The key ingredient, for him, is a strong mind,” Sang added.

Like everyone, Kipchoge has been shaped by many influences: his single mother, who worked hard to support him and his siblings growing up; his own faith as a Catholic; Sang’s longstanding guidance.

In Kenya, open discussion of the Talai and their abilities is taboo. But some wonder privately if coming from a community of seers doesn’t give him an advantage: perhaps he can anticipate how a given race will play out, or maybe Talai diviners back home are aiding him?

If this is the case, Kipchoge won’t say it: he laughed when asked if he possesses any special abilities, calling it a “communal secret.” Still, he credits his Talai upbringing with teaching him to embrace sacrifice — the sort that compelled his ancestors to resist the British, and has fueled his longevity as a world-class athlete.

“Even in our childhood, we were advised to work hard, and behave in a fearless manner,” he said.

As he aims for his third straight victory in London, his marathon milestones resonate — around the world, among all of Kenya’s 44 tribes and back home in Nandi County. His successful sub-two-hour attempt, he noted with pride, brought an estimated 120,000 fans to Vienna’s streets. Tens of thousands more watched on big screens across Kenya, including in Kapsisiywa, where his Talai forebears had been banished 100 years before. Only later, when he went online and saw the videos of all his fans, did he truly grasp the ability of his performance, and wise words, to inspire.

“When I saw those huge crowds, I was overwhelmed,” he said. “I can say I was a happy person.”