Dublin are through to the All-Ireland final after a comfortable 1-24 to 0-12 win over Cavan.

It has been a rollercoaster championship campaign, with underdogs springing surprises in recent weeks. But, as the race for the Sam Maguire Cup turns for home, Dublin are determined for there to be no more Cinderella stories in 2020.

There were question marks surrounding the men from the capital before the championship, with many wondering if the change of management or the departure of some big names would affect the side.

But Dessie Farrell’s charges find themselves back in another decider, after brushing aside the challenge of Ulster champions Cavan.

Cavan started brightly, taking the lead early with impressive scores from Martin Reilly, Thomas Galligan and James Smith. But, after it was 0-3 apiece, Dublin moved up a gear, and Cavan could not match their opponents.

The Sky Blues made their dominance count, as Dean Rock helped them to a 0-7 to 0-4 lead at the first-half water break.

The Dubs were ferocious in the tackle, pushing up on the Breffni men when they had possession. 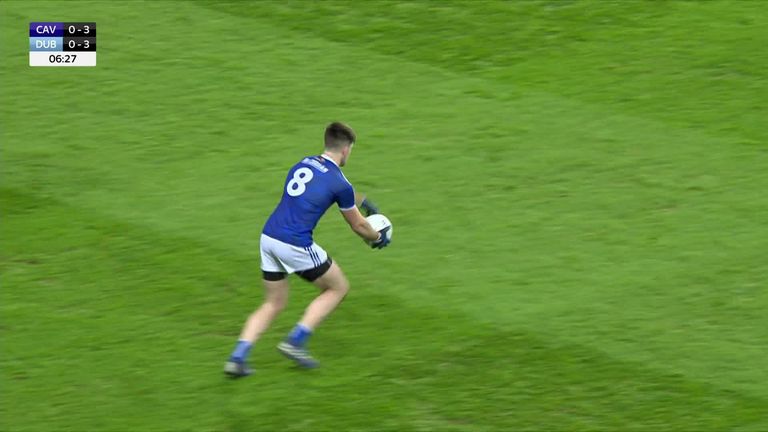 Trailing at the break was not uncharted territory for Cavan this year. Mickey Graham’s charges had found themselves behind at the break in all four of their Ulster Championship games. Indeed, the margin had been greater against Monaghan and Down.

But this proved a bridge too far for 2020’s comeback kids.

O’Callaghan, Fenton and Paddy Small kept the scoreboard ticking over after the restart. And it would have been over as a contest in the 45th minute, had Kilkenny’s fierce shot found the net. However, Reilly tracked back and parried the ball off the line and over the bar.

Thomas Galligan was moved into full-forward to add a target up front, but to little avail as Dublin moved nine ahead at the second water break.

To their credit, Cavan dug deep and scored three points without reply.

However, as the game opened up, Dublin tasted blood.

Philip McMahon blasted a goal effort wide. But, moments later, they found themselves in with a chance of another three-pointer, and did not make the same mistake. Dean Rock floated a hand-pass to the on-rushing Robbie McDaid, who palmed it past Raymond Galligan.

From there, Dublin eased to the 15-point victory. Cavan finished with 14 men, as Thomas Galligan was shown a second yellow late on for a foul on Stephen Cluxton.