Just before the Los Angeles Dodgers were presented with the commissioner's trophy for winning the 2020 World Series on Wednesday (AEDT), the broadcaster announced on air that Justin Turner had been removed from the clinching game six against the Tampa Bay Rays after testing positive for coronavirus.

Turner, 35, who has been with the Dodgers since 2014, was replaced during the eighth inning of the game, which the Dodgers won, 3-1, to claim the title. 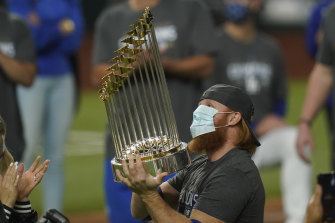 Justin Turner, who was pulled in the eighth inning after testing positive for coronavirus, celebrates with the trophy.Credit:AP

"Thanks to everyone reaching out!" Turner said on Twitter. "I feel great, no symptoms at all. Just experienced every emotion you can possibly imagine. Can'’t believe I couldn't be out there to celebrate with my guys! So proud of this team [and] unbelievably happy for the City of LA."

Commissioner Rob Manfred confirmed Turner's positive test moments after presenting the World Series trophy to Los Angeles – a jarring reminder of all that's been different in this season where the perennially favoured Dodgers finally broke through.

"It's a bittersweet night for us," Manfred said during an interview with Fox.

"We're glad to be done," Manfred said. "I do think it's a great accomplishment for our players to get this season completed, but obviously we're concerned when any of our players test positive. We learned during the game that Justin was positive and immediately isolated him to prevent the spread."

Turner went 0 for 3 with two strikeouts before he was replaced by Edwin Rios at third base.

During the regular season, players and on-field staff were tested for the virus every other day. But during the post-season, the testing was increased to every day. As of Friday, there had not been a positive virus test among MLB players for 54 consecutive days.

While the regular season was played in a home and away format, the post-season has been played in a "bubble" since the division series.

The New York Times, with AP