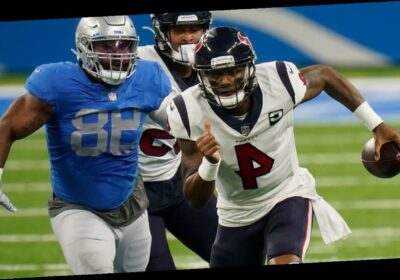 Deshaun Watson could be the next quarterback to be traded and while there have been numerous reports about his unhappiness with the Houston Texans, he has not expressed an opinion either way.

“Loyalty is everything. Don’t you EVER forget it,” he tweeted.

Earlier this week, Watson was spotted working with his foundation in his hometown of Gainesville, Ga., to help feed over 10,000 people.

It’s unclear what will happen next between Watson and the Texans.

Texans chairman and CEO Cal McNair attempted to shut down any kind of rumors regarding Watson last week.

“There is a lot of misinformation out there, I’ll leave it at that,” McNair said, via ESPN. “Today we want on focus on J.J. Deshaun is our quarterback, he is a Texan, and we expect him to remain a Texan, and we’ll leave [it at] that.”

The tipping point for Watson appeared to be when the team hired new general manager Nick Caserio without his input. The hiring of new head coach David Culley thereafter had no effect on Watson’s desire to be traded, according to multiple reports.

Watson, who was drafted by the Texans in 2017, signed a four-year, $156 million contract extension in September. He finished the 2020 season with a league-high 4,823 passing yards and 33 touchdowns and a career-low seven interceptions.