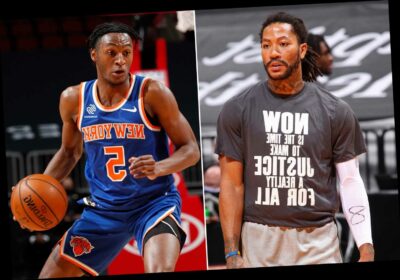 “He just stressed to me — first of all he gave me his number — said anything I need just hit him,” Quickley said on Zoom after Tuesday’s morning shootaround. “But he sat down with me a little bit, me and Obi actually, just told us he’s here to help us, he’s here to help us grow and things like that. It’s good to get a chance to talk to him a little bit last night.”

Quickley and the veteran Rose have one thing in common – they shared the same coach in college in John Calipari.

Now Rose, who played for “Cal” in Memphis, and Quickley will battle for Tom Thibodeau’s affection as the Knicks sprinkle Rose in to the roster.

Quickley said he didn’t think Rose was going to debut Tuesday against the Heat, but added he wasn’t 100 percent sure.

Since the Super Bowl Sunday trade with Detroit, social media has erupted with concerns that Rose’s arrival will steal minutes from Quickley, a fan favorite who is averaging 18 minutes a night. Rose is expected to come off the bench.

However, Quickley was quick to say how he “admires” Rose, will learn from the 2011 MVP and that they are versatile enough to play together in the same backcourt.

“We both played for the same coach in college. So we shared some similar experiences there, playing for a tough-minded coach,” Quickley said. “And then we get Coach Thibs rookie year. So a lot of similarities. I get a chance to pick his brain, something I like to do is ask a lot of questions and take notes and feedback and all that stuff. So it should be good.”

Left unsaid is this could be competition for Quickley, 21, to fully spread his wings, considering Thibodeau pushed for the trade. Thibodeau coached Rose in Chicago and Minnesota, and they have a special relationship.

“I have no idea how it will work out,” Quickley said. “I’ll let the coaches handle all that. But as far as me, I know I’m a versatile player. That’s something I stressed before the draft, that I can play on or off the ball. So just being able to be that type of player, I can fit into any system any way. “I feel like he’s a versatile player as well, just watching him play. He can shoot it, get in the lane and create. And then on defense, I feel like we can both defend as well. So just being versatile players on and off the ball, I feel like it gives us an advantage.”

Quickley was 11 when Rose won the MVP award with Thibodeau as his coach. Rose, who was not made available to the media, said on a Knicks video he’s here to “help the young players.”

Quickley is hoping that happens and liked his first chat with Rose.

“A 13-year veteran of the league, anytime you can get a chance to pick someone’s brain who’s been through pretty much everything – playoffs, everything, as far as MVP. It’s always a good chance to learn from somebody who has experience,” Quickley said. “That’s the best teacher as far as picking his brain through everything he’s known about the game. It’s something I’m looking forward to.”

Selected 25th in November after being projected as a second-round pick, Quickley has been the Knicks’ biggest revelation after Julius Randle’s All-Star-level campaign. He came out of Kentucky with scouting concern he could be an undersized shooting guard.

The Knicks are impressed, but still don’t consider Quickley as a full-blown point guard because of his raw playmaking skills.

Known for his floater and Stephen Curry-like long 3s, Quickley is averaging 12 points and shooting 36.3 percent from 3-point land and 93 percent from the free-throw line.

“They feel like when I’m at my best I’m aggressive, looking to score first, and then create for my teammates as well,” Quickley said.

Rose was not made available to the media because Dennis Smith Jr., involved in the trade, had not yet taken his physical for the Pistons.