David Quinn takes some blame for Rangers debacle: ‘Pissed off’ 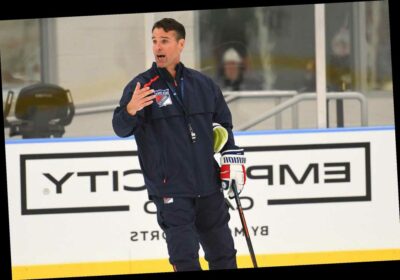 Rangers star out at least a month in massive blow

Rangers come out flat in loss to rusty Devils

David Quinn said the Rangers’ effort was an issue in their loss to the Devils on Tuesday, but he isn’t absolving himself while looking for answers.

A day after his damning assessment of the Rangers’ fourth straight loss, the third-year coach shouldered some of the blame for the 5-2 setback against a team that had not played in more than two weeks.

“As a coach, you always feel like it’s on you,” Quinn said Wednesday after practice. “It’s just a sickening, sickening feeling.

“Obviously, we were all pissed off [Tuesday] night, no one more than I was. You gotta let the dust settle, you gotta corral your emotions here and we’ve got to move past it and make sure that it doesn’t happen again.”

The Rangers have found plenty of ways to lose games early in the season, but Quinn said their effort had never been a problem before Tuesday.

“Losing can wear on you and I think that might be the case a little bit right now,” Quinn said. “We don’t have any swagger. We don’t have any confidence to the level that we need to win. But that’s something that we’ve got to find from within.

“So yeah, you’re damn right I feel a huge responsibility for it. That’s just coaching, that’s the profession that we’re in.”

Quinn pledged Tuesday night to address the Rangers’ effort before, during and after Wednesday’s practice and again before Thursday’s game against the Flyers — another team that hasn’t played in 10 days because of COVID-19.

That did not result in a practice filled with skating laps or sprints, but instead Quinn said he was “encouraged” by the 45-minute session.

“Good energy, I thought guys had some jump in their step,” center Ryan Strome said. “At this stage in our season, I think with all the frustration we’ve had and the ups and downs and the way our record is, it’s just a matter of getting ready for the next game and moving on.”

After sitting out Tuesday’s loss, Artemi Panarin (lower body) and K’Andre Miller (upper body) both returned to practice Wednesday and are expected to be back against the Flyers.

Panarin rejoined Strome and Kaapo Kakko on the second line while Alexis Lafreniere was back on the third line with Kevin Rooney and Colin Blackwell.

Defenseman Jack Johnson was also finally cleared to practice, after being “day-to-day” with a groin strain since last playing on Jan. 26.

“He’s going to need a few practices before we’re able to put him in,” Quinn said.

The Flyers, who last played on Feb. 7 before shutting down with multiple COVID-19 cases, have 12 healthy forwards and eight healthy defensemen, coach Alain Vigneault told reporters.