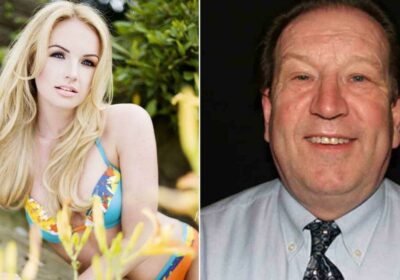 Darts walk-on girl Charlotte Wood has paid a classy tribute to John Gwynne, 77, who passed away on Saturday morning.

Wood tweeted a couple of pictures with the pair together and captioned the post: "Fly high John…you were simply the best….the darts family will all miss you so much." Gwynne's son, Andrew Gwynne MP, confirmed the legendary broadcaster had died following a battle with cancer.

Gwynne was part of the Sky Sports team for two decades, and he retired in 2013 after covering 20 World Championships and 20 World Matchplays. Alongside Wood, tributes have poured in for the broadcaster after news of his death.

Wood, who is also a model, was one of darts' most recognisable walk-on girls before she was given the boot in 2018.

Wood spoke to Daily Star Sport about the axe, and she hit out at people wanting her to lose her day job: "My message is really, at the end of the day, I don't believe most of these people, the people complaining about it, watch darts.

Wood has since continued with her modelling career alongside fellow former walk-on girl, and close friend, Daniella Allfree.

She added: I know one radio station, they said would your dad be proud of you doing a job like that? My dad is immensely proud, he's been watching me at darts tournaments."

Wood remains active in the darts world – and she is regularly seen at corporate events.

The stunning blonde shares snaps from these events, and she often posts throwback pics to Instagram of her in her walk-on days.