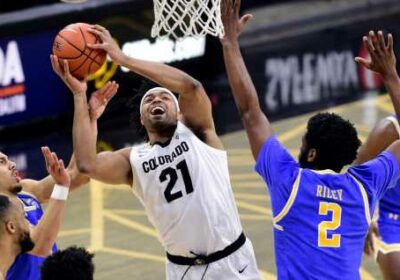 LAS VEGAS — Tad Boyle gave assistant coaches Bill Grier and Rick Ray critically important projects this week. And for one of them, all that hard work will be for naught.

This week marked a first for the Colorado Buffaloes as they prepared for the Pac-12 Conference tournament. For the first time since joining the league, the third-seeded and 23rd-ranked Buffs received a first-round bye for the tournament, meaning they will not know their quarterfinal foe until a victor emerges between Cal and Stanford in the final first-round game late Wednesday night.

Grier has been assigned the scouting report for Stanford. Ray is handling the report for Cal. And on Thursday morning, the Buffs will dive into a crash-course on one of those scouting reports as they prepare for their quarterfinal showdown late Thursday night.

“We have two different coaches preparing for two different games, which is nice for me because I don’t know who to really look at,” Boyle said. “Coach Ray can really dig into Cal. What worked, what didn’t work in the two games we played them. How they’ve been playing recently and all those sorts of things. And coach Grier does the same thing for Stanford.

The Pac-12 tournament generally has been kind to the Buffs. Until last season, CU had never lost its opening game in Las Vegas, a run that ended with what turned out to be a season-ending defeat against Washington State in the first round. The remainder of the Pac-12 tourney, as well as the NCAA Tournament, was canceled the next day at the start of the COVID-19 pandemic.

Like last year, the Buffs already have their ticket punched to the NCAA Tournament regardless of how the Pac-12 tournament unfolds. Unlike last year, when CU arrived in Vegas mired in a four-game losing streak, the Buffs instead enter the fray with four consecutive wins and a NET ranking of 13 (as of Wednesday).

The Buffs will attempt to maintain that momentum ahead of Selection Sunday, when the Buffs are expected to receive their first NCAA tourney bid since 2016. The Pac-12 tournament will provide a test run of sorts, as Boyle has been imploring his team to dig deeper into the next-game approach that has served CU so well while posting the eighth 20-win season in 11 years under Boyle — and in a shortened regular season as well.

“We’re not going to Las Vegas to win a championship. We’re going to Las Vegas to win a game Thursday night,” Boyle said. “And that’s all that’s on our mind. We’re going to try to live to see another day, and then we’ll figure out what comes on Friday. But we’ve got to take care of Thursday. It’s that next-game mentality that this team has really bought into.

“The resiliency of this team has been really good this year in terms of bouncing back after losses. The difference now is you don’t bounce back from losses. You’re out of the tournament after a loss. That part’s over. Now it’s onward and upward. We’re going to Las Vegas to win a game Thursday night.”

(Note: All Cal and Stanford info as of Wednesday)

NOTES: The Buffs swept the season series against Stanford but split against Cal, with the home team winning each game…On Wednesday, Stanford’s Oscar da Silva was named the Pac-12 Scholar-Athlete of the Year…The Buffs are 13-8 all-time in the Pac-12 tournament, with a 7-1 mark as the higher seed. That lone loss was last year’s first-round defeat against Washington State…Wright is set to play in his 127th game at CU, matching Xavier Johnson and former teammate George King for eighth all-time…During the current four-game winning streak, the Buffs have held their opponents to a .383 mark from the field…The winner of CU’s quarterfinal game will play in the late semifinal Friday night (9:30 p.m. MT, ESPN).