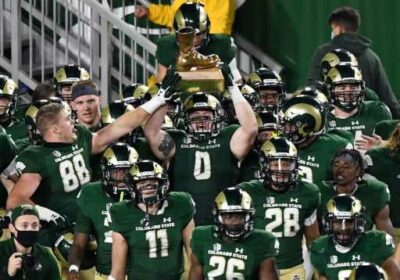 Protection blues: After weathering a nine-sack onslaught at San Jose State last weekend, CSU is on a pace to give up 57 of them this season. The Rams are next-to-last among FBS programs in sacks given up per game (4.78 to Akron’s 5.0). CSU has surrendered fewer than three sacks in a game just twice all season — and won both games (at Nevada, vs. Hawaii). Unfortunately for the Rams, Wyoming ranks 19th in the country in sacks per game (2.89) and second in the Mountain West.

Family ties: It doesn’t take much for a Border War game to get personal, but this one has more of a familial feel — CSU’s defensive coordinator, Freddie Banks, played for Wyoming coach Craig Bohl at North Dakota State while Rams LB coach Adam Pilapil played under Bohl with the Pokes.

Norvell vs. Bohl: Jay Norvell’s faced off against Bohl four times in the Mountain West already, with Bohl’s Cowboys holding a 3-1 edge vs. Norvell’s Nevada squads. Norvell won the last head-to-head meeting, though, by a score of 37-34 in October 2020.

Made in Colorado, but …: Wyoming’s roster features 21 Colorado natives. That ties California as the U.S. state that’s contributed the most players to the Cowboys’ roster. CSU’s squad features 33 Coloradans.

CSU LT Jacob Gardner vs. Wyoming DE DeVonne Harris. The Pokes defender comes into Canvas tied for second in the Mountain West in sacks (7.0) and ranks fourth in sacks per game (0.78).

CSU RB Avery Morrow vs. Wyoming LB Easton Gibbs. Only UNLV (23), Utah State (23), Hawaii (30) and CSU (30) have allowed more red-zone touchdowns to the opposition among MW schools than the Pokes’ 21. Morrow’s got to keep the chains moving and nab the hosts six points instead of three if the Rams are to pull off the upset.

Matchups aside, the Pokes are more than happy to let teams hang around. It’ll be another long day for CSU quarterback Clay Millen, but the Rams will have a chance to win this in the fourth quarter.