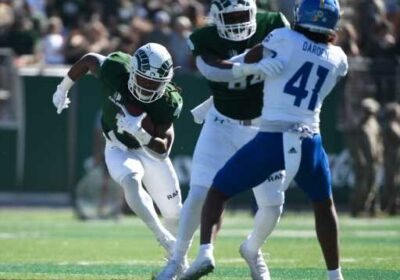 Momentum surge. Don’t look now, but CSU might contend in the Mountain West this season. It’s hard to believe after a miserable 0-2 start that made some wonder if the Rams might go winless. But CSU has since defeated Toledo, played No. 5 Iowa close on the road, and dismantled San Jose State last week at Canvas Stadium. The Rams’ defense has exceeded preseason expectations and the offense is finding a rhythm. CSU has plenty of confidence as a road favorite this week.

Big Todd on campus. CSU’s starting QB silenced plenty of critics against SJSU. Todd Centeio opened the game with 12 consecutive completions (second-longest streak in school history) to finish with an absurd 86% completion rate, 232 yards passing and zero interceptions. The Rams must learn how to finish drives after settling for six made field goals last week. But Centeio showcased a strong handle on the offense and completed one 60-yard bomb to Ty McCullouch for a touchdown. All promising signs for CSU.

Deep threat. Coach Steve Addazio recently provided some good injury news with significant ramifications for the offense. Wide receiver Dante Wright missed the Toledo and Iowa games before appearing for only one snap vs. SJSU. But Addazio told reporters he expects Wright to have “some involvement” this week against New Mexico. Wright brings track speed on the outside and would help take pressure off likely All-American tight end Trey McBride in CSU’s passing game.

Lowly Lobos. New Mexico opened the year with a pair of victories over Houston Baptist and New Mexico State. It’s been downhill for the Lobos ever since with four consecutive defeats behind an offense that’s scored just 20 total points over that time. The defense hasn’t been much better giving up 38 to Air Force and 31 to San Diego State. It sets up nicely for CSU to capitalize against a lesser opponent. CSU has a 10-game winning streak over New Mexico. Will the Rams keep it going?

CSU RB A’Jon Vivens vs. Lobos defense. The Mullen product was outstanding against SJSU with a career-high 31 carries for 121 yards. It’s hard to imagine that intense workload becoming a norm in the Rams’ offense. But his continued emergence as their go-to back would help CSU tremendously.

A win on Saturday puts CSU in a realistic position to reach a bowl game. It’s been quite the turnaround in Fort Collins.

For the second straight weekend, the Rams run the rock and defend well enough to stymie another Mountain West also-ran with a backup signal-caller.

Daz’s Dudes get one last dress rehearsal before things turn up a notch with games at Utah State, vs. Boise State, at Wyoming and vs. Air Force over the next four weeks.