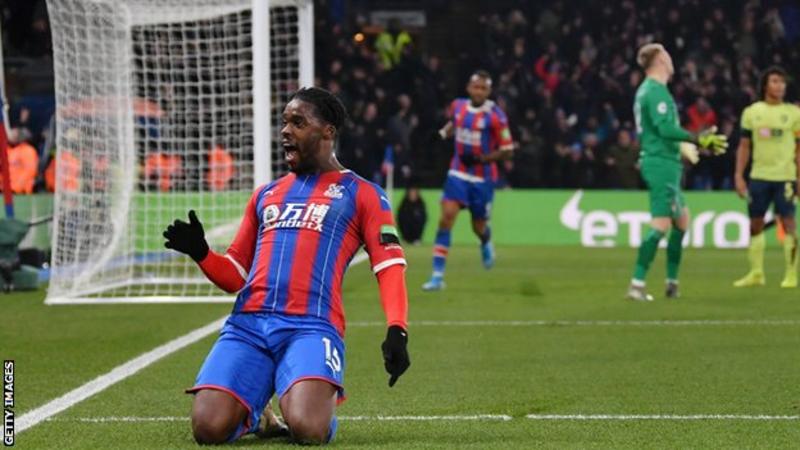 Jeffrey Schlupp struck in the second half as 10-man Crystal Palace beat Bournemouth to move up to fifth in the Premier League.

The hosts lost Mamadou Sakho early in the first half when he was sent off for a high challenge on Adam Smith.

Bournemouth dominated possession from that point but failed to make the most of their man advantage as they rarely tested Vicente Guaita in the Palace goal.

Philip Billing hit a shot straight at Guaita at the end of the first half, while Dominic Solanke just failed to connect with a dangerous low ball shortly after the restart.

It appeared as though the first Premier League match to be broadcast on Amazon Prime would end goalless, but instead the hosts snatched victory when Schlupp, on as a first-half substitute for the injured Patrick van Aanholt, weaved his way through the Bournemouth defence before tucking home a low shot.

After a run of five games without victory, Palace have now won their last two having also beaten Burnley 2-0 at the weekend.

Defeat for Bournemouth was their fourth in a row and leaves them in 12th.

Back-to-back wins but at a cost

This was an excellent, disciplined performance from Palace, particularly after a disrupted first half in which Sakho – making his first Premier League start since September – was shown a straight red before Van Aanholt had to go off when he picked up an injury.

But the hosts kept their shape superbly to limit their opponents to few opportunities while continuing to threaten on the counter.

Palace have struggled for goals this season but have usually made the most of their limited chances, and so it proved in this game as they snatched victory with their first shot on target.

It was a smash-and-grab win but another excellent result overseen by Roy Hodgson, who has worked wonders with a limited budget. Palace have won 15 games in 2019 – more than Arsenal, Manchester United and Tottenham.

However, it did come at a cost. With Sakho now set for a three-match ban and Van Aanholt facing a possible spell on the sidelines, Palace are threadbare in defence with Gary Cahill and Scott Dann already absent through injury.

Three wins in their first six Premier League games gave Bournemouth fans hope of challenging for a top-six finish, but they have lost their way since then with just one win since the end of September.

Boss Eddie Howe felt his side had done enough to win any one of their previous three games, but the same could not be said about this one as they failed to make the most of the extra man.

They lacked urgency and creativity and, as they pushed forward in the closing stages in a desperate bid to end their losing run, left themselves exposed to Palace’s effective counter attack.

With three of their next four games coming against Liverpool, Chelsea and Arsenal, this was a fixture Bournemouth really needed to get something from.

Man of the match – Jeffrey Schlupp 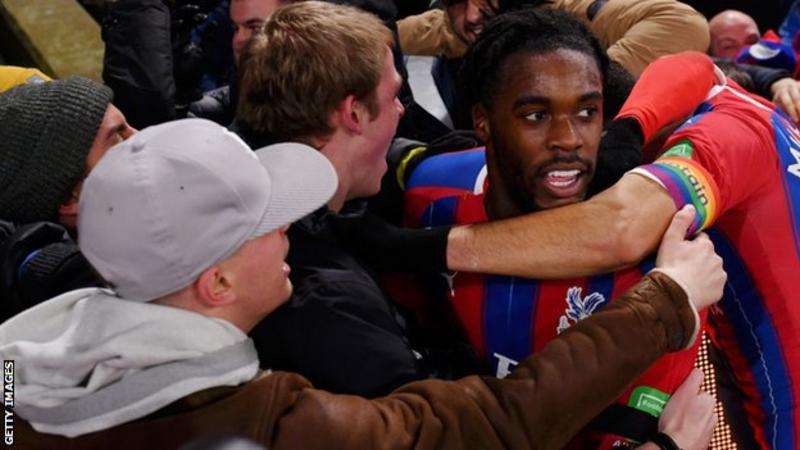 ‘It wasn’t a lucky win’ – what they said

Crystal Palace manager Roy Hodgson told Match of the Day: “It was a great victory. I’m full of praise for what the players did today. To firstly lose your centre-back to a challenge which the referee deems to be a red card, and then to lose a left-back in an area where we have no cover…

“The last place we could really cover injuries was at the back, but we did and I thought the players showed an outstanding attitude at the back.

“Normally when you win 1-0 with 10 men you think you were lucky, but that wasn’t really the case and we had a few chances of our own so I’m delighted for the players.”

Bournemouth manager Eddie Howe told Match of the Day: “It is a tough one for us to take. We needed to get something from tonight’s game and we are hugely disappointed we haven’t.

“We didn’t do enough with the ball and we didn’t hurt them enough. Credit to them for how they defended in their shape. We should be able to do better and I have to take responsibility for that.

“When you’re in this form, it is a tough one to work out, we could have won all of these games but we have lost them narrowly.”

Jordan Ayew (Crystal Palace) wins a free kick in the attacking half.

James Tomkins (Crystal Palace) wins a free kick in the defensive half.

Luka Milivojevic (Crystal Palace) wins a free kick in the defensive half.

Attempt saved. Jefferson Lerma (Bournemouth) right footed shot from outside the box is saved in the bottom left corner. Assisted by Ryan Fraser.

James McArthur (Crystal Palace) is shown the yellow card for a bad foul.

Lewis Cook (Bournemouth) wins a free kick in the attacking half.

Philip Billing (Bournemouth) is shown the yellow card for a bad foul.

Goal! Crystal Palace 1, Bournemouth 0. Jeffrey Schlupp (Crystal Palace) left footed shot from the left side of the box to the centre of the goal. Assisted by James McArthur.

Vicente Guaita (Crystal Palace) wins a free kick in the defensive half.

Attempt blocked. Simon Francis (Bournemouth) right footed shot from the right side of the box is blocked. Assisted by Harry Wilson.

James McCarthy (Crystal Palace) is shown the yellow card for a bad foul.

Adam Smith (Bournemouth) wins a free kick in the attacking half.

Luka Milivojevic (Crystal Palace) is shown the yellow card for a bad foul.

Jefferson Lerma (Bournemouth) is shown the yellow card for a bad foul.

Wilfried Zaha (Crystal Palace) wins a free kick in the defensive half.

Wilfried Zaha (Crystal Palace) wins a free kick in the defensive half.