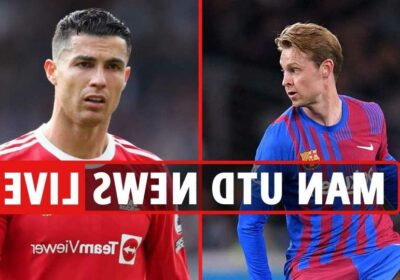 The Nou Camp president Joan Laporta said: "Frenkie de Jong is a Barcelona player – we don't want to sell him unless we have no other choice."

United could see their Portuguese icon Cristiano Ronaldo head for the exit door this summer.

And his representatives have reportedly approached new Chelsea owner Todd Boehly on a deal which would see Ronaldo make the switch to Stamford Bridge.

Meanwhile, a video of Erik Ten Hag slamming United's first training session has emerged with the Dutchman not happy with what he is wtinessing.

And it has been claimed that Ajax ace Lisandro Martinez is pushing for a move to the Premier League which is a huge boost for Man United but Arsenal are also waiting in the wings.