North Queensland will scour the NRL open market but options for a marquee signing are decidedly limited after missing out on Valentine Holmes.

The Cowboys' plans for their fullback role have evaporated over the past two months after Ben Barba was banned, and then Holmes on Tuesday accepted a spot in the NFL's International Pathway Program with the New York Jets. 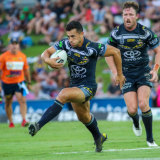 Jordan Kahu has been one of the players used in the No.1 jersey for the Cowboys. Credit:AAP

The Cowboys had hoped to lure Townsville product Holmes to the club in 2020 and had a back-up scheme in place after signing Barba to a one-year deal.

However, Barba was sacked by the club without playing a game and banned for life by NRL CEO Todd Greenberg after an altercation with his partner at a Townsville casino.

North Queensland general manager of football Peter Parr said the club had a roster spot and the salary cap room to make a mid-season signing before the June 30 deadline; however, it would make a move only for the right player.

"We're like everyone else, we're always trying to find marquee players," said Parr. "Whether they come from within or outside the club.

"With what happened with Ben Barba and Val making his decision, two of our real options have disappeared. We'll be looking to fill that void.

"How we do that remains to be seen."

It's understood the club has ruled out making a play for Parramatta skipper Clint Gutherson.

There are few blue chip fullbacks coming off contract at the end of the year.

The Cowboys have used Jordan Kahu, who is signed to a one-year deal, and Te Maire Martin in the No.1 jersey in the opening four rounds.

The only other fullbacks with NRL experience off contract at the end of this season are the Eels' Bevan French and Josh Hoffman, St George Illawarra youngster Jai Field and Canberra's Brad Abbey.

Holmes has a strong connection to the Cowboys through captain Michael Morgan, whose wife is the sister of Holmes' partner.

Holmes texted Morgan to tell him of his decision to test himself with the New York Jets as he attempts to earn a spot on a 53-man NFL club roster.

Morgan said while he was disappointed not to see Holmes in a Cowboys jumper next year, he was pleased for his good mate.

"All along I was hopeful that he'll do well," Morgan said.

"It would have been nice to see him one day play here.

"I knew his intentions were to go over there and try to do well. I've supported him through that."